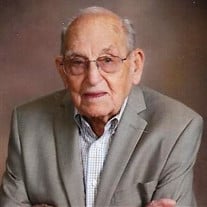 Paul Farmer, age 103 of Mattoon, IL peacefully passed away at his residence at 2:00 A.M., Sunday, January 13, 2019. A funeral mass in his honor will be celebrated on Friday, January 18, 2019 at 10:00 A.M., at Immaculate Conception Catholic Church, 320 N. 21st Street, Mattoon, IL 61938; Father John Titus will officiate. A graveside burial will be held immediately thereafter in Calvary Cemetery. A rosary service will be conducted at 4:30 P.M., Thursday, January 17, 2019 at Mitchell-Jerdan Funeral Home, 1200 Wabash Avenue, Mattoon, IL 61938. The family will receive friends from 5:00 P.M.-7:00 P.M., at the funeral home. Paul was born November 15, 1915 in Belgrade, MO to the late Judson and Alzarah (Jinkerson) Farmer. He married Alice Groben on June 2, 1951 at the Immaculate Conception Catholic Church in Mattoon, IL. He is survived by his loving and caring wife Alice Farmer of Mattoon, IL; his devoted daughter, Polly Wooddell and husband Ken of Norman, OK; three grandchildren, Katie Wooddell of Pinole, CA, Kenneth Paul Wooddell and wife Becky of Edina, MN, and Kerry White and husband Jonathan of Wauwatosa, WI; and five great-grandchildren, Hailey, Elijah, Blake, Wesley, and Casey. He is preceded in death by his three brothers. Paul was a member of the Immaculate Conception Church in Mattoon, IL. He graduated with a Bachelor’s and Master’s degree in Geology from University of Missouri in Columbia, MO. He was a member of Sigma XI Graduate Honorary Scientific Society. From 1941 to 1949, he worked as a geologist for Gulf Refining in Mattoon, IL before becoming an independent Petroleum and Coal Geologist Consultant for Exxon Mobile. He worked in several north western states including Alaska. Paul was named as a Qualified Professional Geologist of Illinois Geologist Society in 1960. He was also a member of the American Association of Petroleum Geologist. After retirement he enjoyed working as a hobby for Hogan Furniture, restoring and refinishing furniture. He also took pleasure in a relaxing round of golf. He was a member of the Mattoon Golf and Country Club for many years and loved traveling once a year with his golf group to various golf courses across the country. On his 88th birthday, Paul shot an impressive score of 87. In the months of March and February, he and Alice often traveled together to Mexico, Jamaica, Hawaii, and the Western States. He was passionate about Native American history, enjoyed fly fishing every year in Lake City, CO and hunting in the Dakota’s. Paul’s family was his pride and joy. The legacy of his kind spirit, passion for learning, and zest for life will live on through them. To his family, Paul was the perfect gentleman. Memorials in his honor may be made to Immaculate Conception Catholic Church, Lincoln Land Hospice, 1004 Health Center Drive, Mattoon, IL or Mattoon Community Food Center, 600 Moultrie Avenue, Mattoon, IL 61938. Please visit www.mitchelljerdan.com or www.facebook.com/mitchelljerdanfuneral home to light a virtual candle or share a memory with his family.

The family of Paul Farmer created this Life Tributes page to make it easy to share your memories.

Paul Farmer, age 103 of Mattoon, IL peacefully passed away at...

Send flowers to the Farmer family.