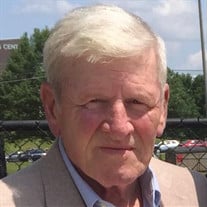 Paul Donald “Don” Cockrum, age 76 of Mattoon, IL passed away at 1:34 PM, Monday, January 25, 2021 at Sarah Bush Lincoln Health Center in Mattoon, IL. A Celebration of Life will be held at a later date. Mitchell-Jerdan Funeral Home, located at 1200 Wabash Avenue, Mattoon, IL 61938 is in charge of services. Don was born on January 11, 1945 in Vincennes, IN to the late Paul C. and Kathryn P. (Cardinal) Cockrum. He married Ida M. Newton on December 21, 1967 in Mt. Carmel, IL; she survives and resides in Mattoon, IL. Other survivors include two daughters, Stephanie L. Cockrum of Mattoon, IL, Erin C. Cockrum and husband Justin Toction of Champaign, IL; two grandchildren, Jerrod C. Evans and significant other Courtney Thomas of Mattoon, IL, Charles J. Cockrum of Mattoon, IL; one great-grandchild, Elliott Grace Evans of Mattoon, IL; one brother, Cyrus R. Cockrum of Colorado Springs, CO; and one sister, Patricia Hayden and husband Roger of Havana, FL. He is preceded in death by one sister, Jacqueline S. Stovall; and one great-grandchild, Cohen Thomas Evans. Don honorably served our country in the United States of America Army during the Vietnam Era and was stationed at the Berlin Wall in Germany. He was a lifetime member of the Mattoon VFW Post 4325. Don retired from Mattoon Community School District #2 as a bus driver, a job he greatly enjoyed and took pride in. He was a former employee of Downtown Ford, Anaconda, General Electric, and manager and truck driver for Rural King in Mattoon, IL. He enjoyed helping others and volunteering his time at various local organizations. He was a former commissioner and coach for Ponytail Baseball and actively involved at Camp New Hope, where he liked driving the boat on the lake. Don loved the game of golf and was a self-proclaimed “avid duffer.” He was a devout member of Rogala Public Links in Mattoon, IL. He also cherished his times on various PGA courses throughout the country and even Jamaica. He enjoyed his Tuesday night bowling league and early morning breakfast with his friends at the Downtown Diner. Most important to Don was his family. His children and grandchildren were the light of his life. He was loved immensely and will be missed. Memorials in his honor may be made to Camp New Hope, 1364 County Rd 100 E, Neoga, IL 62447 or Coles County Habitat for Humanity, 990 West State Street, Charleston, IL 61920. Please visit www.mitchell-jerdan.com or www.facebook.com/mitchelljerdanfuneralhome to light a virtual candle in her honor or share a memory with the family.

The family of Paul Donald "Don" Cockrum created this Life Tributes page to make it easy to share your memories.

Send flowers to the Cockrum family.