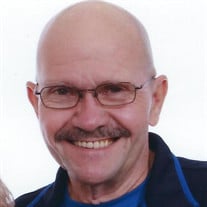 Mattoon, IL – Patrick “Pat” A. Kress, age 76, passed away in his home at approximately 6:00 a.m., Saturday, December 10, 2016. Pat requested no visitation or funeral services, as he preferred to be remembered by the good times. The family suggests, in lieu of flowers, donations or memorials in his name can be made to Carle Hospice, the American Heart Association, or a wildlife association of the donor’s choice. Mitchell-Jerdan Funeral Home, located at 1200 Wabash Avenue, Mattoon, IL 61938, is assisting the family with arrangements. Pat was born on October 27, 1940, in Oakland City, Indiana, the second son of Frederick B. and Dora Lucille (Gardner) Kress. His father who was a life-long railroader out of Indianapolis was transferred to Mattoon in the mid-1950’s. Pat is survived by his loving partner of 18 years, Priscilla Florio; his first wife, Patricia (Edwards) Coventry; daughters, Kelly Kress and Michelle Kress; granddaughters Salena (Brian Alberti) Kress and Ashley (Nathan) Elliott; and nephews Kevin Kress and Darin Kress. His parents, brother Michael Kress, and son James Patrick Kress preceded him in death. In his youth, Pat was an avid guitarist and singer. He was with the Rebel Rockets who later became the Artistics, and also with Libby’s Combo. He received his barber’s license and practiced at Don’s Barber Shop in Mattoon for several years. He then was hired on at Columbia Machine, Inc. as a draftsman. Pat owned a succession of well-known small businesses in Mattoon beginning with The Worm Hole Bait Shop at South 30th & Marshall Ave. in the mid-1970’s to early 1980’s, Pat’s Standard (later Pat’s Amoco) gas station on 12th and Charleston Ave. from the early 1980’s, as well as The Radiator Shop, until the mid-1990’s when he retired. Pat loved the outdoors and became an avid bass fisherman as a young adult. He went on to win several local and national fishing tournaments, helped start an independent angler’s society, and became a freelance outdoors writer with a column called, “The Fishing Line,” for the Mattoon Journal-Gazette and Times Courier in the early 1990’s. His other hobbies included stock car and micro-midget racing, hunting, and later in life a passion for golfing. Please visit www.mitchell-jerdan.com or www.facebook.com/mitchelljerdanfuneralhome to light a virtual candle in his honor or share a memory with his family.

The family of Patrick A. Kress created this Life Tributes page to make it easy to share your memories.

Send flowers to the Kress family.