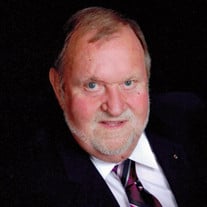 Patrick Michael Keniley III, age 71 of Mattoon, IL passed away at 6:35 AM, Wednesday, July 24, 2019 at his residence surrounded by loved ones. A Funeral Mass in his honor will be at 10:30 AM, Saturday, August 3, 2019 at Immaculate Conception Catholic Church, 320 N 21st Street, Mattoon, IL 61938. A Committal Service will follow at 2:30 PM in Mt. Carmel Cemetery, 10101 West Main Street, Belleville, IL 62223; Military Rites will be conducted by US Navy Honor Guard. A visitation will be Friday evening, August 2, 2019, from 5:00 PM-7:00 PM with a Rosary Ceremony beginning at 4:30 PM at Mitchell- Jerdan Funeral Home, 1200 Wabash Avenue, Mattoon, IL 61938. Patrick was born on August 30, 1947 in East St. Louis, IL the son of the late Patrick Michael, SR and Margaret Jean (Touchette) Keniley. Patrick married his childhood sweetheart, Margaret Louise Romanic on August 11, 1969 in Belleville, IL. He is survived by his wife of fifty years, Margaret (Romanic) Keniley of Mattoon, IL; four children, Kimberly M. Keniley-Ashbrook and husband Jonathan of Homer, IL, Christopher P. Keniley and wife Lindsay of Mattoon, IL, Christina K. Keniley –Browning and husband Jason of Mattoon, IL, Chelsie C. Kamradt and husband Justin of Paxton, IL; ten grandchildren: Ethan, Owen, Aidan and Atticus Ashbrook of Homer, IL, William, Meghann and Lachlan Keniley of Mattoon, IL, Mara and Ava Keniley-Browning of Mattoon, IL and Charlotte Kamradt of Paxton, IL; two brothers, Timothy Keniley of Minneapolis, MN and Joseph Keniley, St. Louis, MO; and two nieces Brenna and Megan Keniley of St. Louis, MO. His parents; two brothers, John and Daniel Keniley; and one sister-in-law, Diana Keniley, preceded him in death. Growing up, Patrick was lovingly nicknamed “Paddy-Mike” by his family and friends. He was a proud graduate from Assumption High School in East St. Louis, IL where he enjoyed playing football and saxophone. Patrick honorably served his country during the Vietnam War in the Navy as Petty Officer Third Class and Boatswain’s Mate on the USS Montrose. After the war, Patrick was employed by Illinois Central-Canadian National Railroad for forty-two years. Patrick was a man of strong faith and member of Immaculate Conception Catholic Church. His hobbies included hunting, fishing, boating, swimming and barbecuing. He was avid reader and always had a book in his hand. He was actively involved in Boy Scouts, serving as a Scout Master for Troop 57 of Mattoon, IL, was a member of Order of the Arrow, and a BSA Lifeguard. Above all, Patrick was a loving husband, father, grandfather, and father-in-law, who was always there for his family. He will be lovingly remembered and greatly missed. Memorials in his honor may be made to Sarah Bush Lincoln Regional Cancer Center, 1000 Health Center Drive, Mattoon, IL 61938. Please visit www.mitchell-jerdan.com or www.facebook.com/mitchelljerdanfuneralhome to light a virtual candle in his honor or share a memory with the family.

Patrick Michael Keniley III, age 71 of Mattoon, IL passed away at 6:35 AM, Wednesday, July 24, 2019 at his residence surrounded by loved ones. A Funeral Mass in his honor will be at 10:30 AM, Saturday, August 3, 2019 at Immaculate Conception... View Obituary & Service Information

The family of Patrick Michael Keniley III created this Life Tributes page to make it easy to share your memories.

Send flowers to the Keniley family.