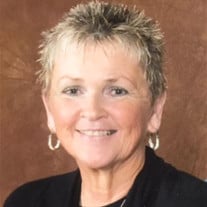 Mattoon, IL – Pamela J. Copeland, age 65, of Mattoon, IL, passed away at 8:51 p.m., Wednesday, April 19, 2017, at Memorial Hospital in Springfield, IL. The funeral service in her honor will begin at 3:00 p.m., Sunday, April 23, 2017, at Mitchell-Jerdan Funeral Home, 1200 Wabash Avenue, Mattoon, IL 61938. Reverend Paul Weber and Reverend Stephanie Johanpeter will officiate. Visitation will be held from 12:00 p.m. until the service begins. Burial will be held at a later date. Born January 19, 1952, in Decatur, IL, Pamela was the daughter of Dr. David G. and Patricia A. (Mills) Wilbur. She married Richard T. Copeland, Jr. on March 9, 1973, in Charleston, IL. Survivors include her loving husband, Richard “Rick”, who resides in Mattoon, IL; two children, Kendra L. Warren and husband Joe of Humboldt, IL, and Kathryn “Katie” Copeland of Cooks Mills, IL; two brothers, David G. Wilbur, Jr. and wife Margaret of Westville, IL, and Curt Smith and wife Bonnie of St. Simmons Island, GA; three sisters, Carol Newby and husband Ken of Humboldt, IL, Linda Ravetto of Mattoon, IL, and Lisa Saunders and husband Brad of Mattoon, IL; two sister-in-laws, Bernice Dennis of Mattoon, IL, and Barbara Martino and husband Tony of Toledo, OH; two grandchildren, Taylor and Ashton Warren; several nieces, nephews, and cousins; and her step-mother, Nila Wilbur, M.D. and husband Ronald Frendreis of West Palm Beach, FL . She also leaves her dear and life-long friend, Vicki Rauwolf of Mattoon, IL. She was preceded in death by her parents. Pamela earned a degree from Burnham City Hospital School of Radiologic Technology in 1972 and over the years worked as an x-ray technician for many area clinics before retiring from Dr. Lacks clinic in 2006. She worked as the Volunteer Program Coordinator for LincolnLand Hospice and served as a dedicated volunteer from 1987 to 2013. She was a member of the Pleasant Grove Baptist Church in Cooks Mills, IL where she had previously served as treasurer and served on several church committees. She was a devoted supporter of Feed the Children, World Vision, and many other charitable organizations. She was a member of the Coles County Home Extension, American Society of Radiologic Technologists, and the Mattoon Rainbow Riding Club, where she was active in working at horse shows. Pamela was an animal lover and appreciated the outdoors, camping, and horseback riding. However, nothing gave her greater joy than spending time with her family and extended family. She was a devoted grandmother and her grandchildren were the light of her life. She cherished her many friends, and will be deeply missed by all those whose lives she touched. Ever selfless and giving, Pamela always put others before herself. She was the rock of the family, never letting her health stand in her way and never complaining. She will be remembered for her loving, open-hearted nature, as well as for her strength and courage. Memorials in her honor may be made to the organization of the donor’s choice. Please visit www.mitchell-jerdan.com or www.facebook.com/mitchelljerdanfuneralhome to light a virtual candle in her honor or share a memory with her family.

The family of Pamela J. Copeland created this Life Tributes page to make it easy to share your memories.

Send flowers to the Copeland family.