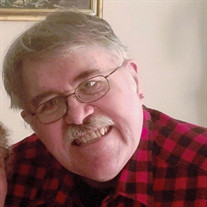 O. Wayne Gage, age 69 of Mattoon, IL passed away at 2:20 AM Friday, July 24, 2020 at his residence in Mattoon, IL. A funeral service in his honor will be held at 10:00 AM, Tuesday, July 28, 2020 at Mitchell-Jerdan Funeral Home, 1200 Wabash Avenue, Mattoon, IL 61938; Pastor Mark Wilkerson will officiate. A committal service will follow at Glendale Memorial Gardens in Pekin, IL at 2:00 PM. A visitation will be held from 8:30 AM until the time of the funeral service at Mitchell-Jerdan Funeral Home. Wayne was born on August 22, 1950 in Danville, IL to the late John E. and Helen B. (Hollon) Gage. He married Rhonda S. Quaite in Pekin, IL, February 11, 1978; she proceeded him in death on June 16, 2002. He is survived by two sons, Michael E. Gage of Colorado Springs, CO; Joshua P. Gage and wife Whitney of Neoga, IL; one brother, Ronnie E. Gage and wife Pam of Marquette Heights, IL; his loving companion Brenda L. Clark of Mattoon, IL; six grandchildren, Timothy Goodwin-Gage, Ivy Goodwin-Gage, Ian Goodwin-Gage, Trinity Upton, Cole Upton, Jakeob Gage, Shelby Gage; and several nieces and nephews. Wayne was a devoted member of the Maranatha Baptist Church, Mattoon, IL. His love and devotion to the Lord led him to become active in the Bus Ministry at Calvary Baptist Church in Gays, IL, providing transportation to children and parishioners in need. Wayne loved to share his faith with all who would listen and enjoyed teaching Bible Study at the Fellowship Center in Mattoon, IL. Wayne made several friends during his employment at Lender’s Bagels in Mattoon, IL where he retired in 2013. Prior to Lender’s Bagels, many will remember Wayne gracing the halls at Pekin High School in Pekin, IL where he worked as a custodian for several years. Most of all, Wayne was a dedicated father and grandfather. His best moments were spent making memories with his loved ones, especially at family gatherings. He will be lovingly missed by all whose hearts he has touched. Please visit www.mitchell-jerdan.com or www.facebook.com/mitchelljerdanfuneralhome to light a virtual candle in his honor or share a memory with the family.

The family of O. Wayne Gage created this Life Tributes page to make it easy to share your memories.

Send flowers to the Gage family.