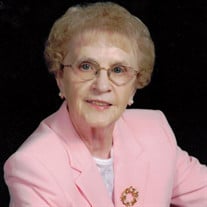 Norma Jean Grisamore, age 89 of Mattoon, IL passed away at 12:45 PM, Wednesday, May 13, 2020 at Sarah Bush Lincoln Health Center. A private graveside service will be held at Dodge Grove Cemetery in Mattoon, IL; Pastor Ron Dickinson will officiate and Reverend Michael Smith will assist. Mitchell-Jerdan Funeral Home, located at 1200 Wabash Avenue, Mattoon, IL 61938 is in charge of services. Norma was born in rural Montrose, IL on November 2, 1930, the daughter of the late Lummis E. and Elizabeth “Lizzie” (Diel) Wallace. She married Harold B. Grisamore on April 6, 1956, and they enjoyed fifty-six years of marriage before his death on November 27, 2012. She is survived by one daughter, Sherry (David) Hills of Naperville, IL; five grandchildren: Chad (Deb) Grisamore, Ryan (Keegan) Grisamore, Kala Grisamore, all of Mattoon, IL, Kyle Hills of Naperville, IL and Kendra (Spencer) Langford of Plainfield, IL; six great-grandchildren: Jaelynn, Abby, Kierstyn, Remington, Rylan and Brock; two sisters, Vera Hetzer of Newton, IL and Luella Wells of Effingham, IL; one brother, Russell (Loretta) Wallace of Charleston, IL; and many beloved nieces and nephews. She is preceded in death by her son, Terry Grisamore, daughter-in-law, Brenda Grisamore, one brother and four sisters. Norma was a member of Mattoon First United Methodist Church, former member of the Mary Circle at church, and past member of the Champion Sunday School class. She was also a member of the Eastern Star and the American Legion Auxiliary, and past volunteer with RSVP and Sarah Bush Lincoln Hospital Guild. Norma was a retired bookkeeper and secretary. She loved to play the piano and organ and entertained many over the years. She loved her family and treasured the moments spent together. She will be dearly missed by all those lives she touched. Memorials in her honor may be made to First United Methodist Church, 1601 Charleston Avenue, Mattoon, IL 61938. Please visit www.mitchell-jerdan.com or www.facebook.com/mitchelljerdanfuneralhome to light a virtual candle in her honor or share a memory with the family.

The family of Norma Jean Grisamore created this Life Tributes page to make it easy to share your memories.

Send flowers to the Grisamore family.