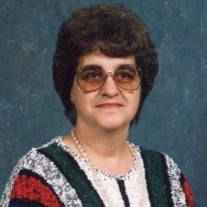 Norma Glenn Elliott, age 86 of Mattoon, IL passed away at 10:11 AM, Sunday, December 27, 2020 at Mattoon Rehabilitation and Health Care Center in Mattoon, IL. Private family services in her honor will be held at a later date. Mitchell-Jerdan Funeral Home, 1200 Wabash Avenue, Mattoon, IL 61938 is in charge of services. Norma was born in Lerna, IL on July 7, 1934 to the late James Tilford and June Adele (Stone) Lucas. She married Levi Elliott Jr. on August 31, 1951 in Sullivan, IL; he preceded her in death January 19, 1983. She is survived by three daughters, Peggy Davis, Juanita Delgado, and Arlene Chesnutt all of Mattoon, IL; one brother, Jack Lucas and wife Vera of Mattoon, IL; two sisters Arlene Turner of Mattoon, IL, Phyllis Roberts and husband Charles of Mattoon, IL; two grandchildren, Ashley Dierkens and husband Randy Jr. of Joelton, TN, and Angela Davis of Effingham, IL; five great-grandchildren; and one great-great grandchild. She was preceded in death by three sons, Rodney, Vaughn, and Walter Elliott; and two brothers. An employee of General Electric in Mattoon, IL, Norma retired in 1996 after twenty-three years of dedicated service. She held memberships at the Eagles Club and American Legion in Mattoon, IL. Norma enjoyed country music, dancing, and travelling. Branson Missouri was one of her favorite vacation destinations. Above all, family was Norma’s heart and soul. The special bond she shared with her son Rodney was beyond compare. Spending time with her grandchildren and great-grandchildren was when her heart was most at peace. Caring for her great-grandson Zac was a pleasure for Norma, it brought meaning and purpose to her life, and made her heart smile. Norma will be warmly remembered for the love, care, and support she so freely offered her family and friends. Please visit www.mitchell-jerdan.com or www.facebook.com/mitchelljerdanfuneralhome to light a virtual candle in her honor or share a memory with the family.

Norma Glenn Elliott, age 86 of Mattoon, IL passed away at 10:11 AM, Sunday, December 27, 2020 at Mattoon Rehabilitation and Health Care Center in Mattoon, IL. Private family services in her honor will be held at a later date. Mitchell-Jerdan... View Obituary & Service Information

The family of Norma Glenn Elliott created this Life Tributes page to make it easy to share your memories.

Send flowers to the Elliott family.