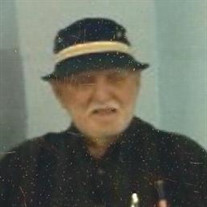 Noah E. McFadden age 83 of Mattoon, IL passed at 4:53 A.M., Tuesday, April 9, 2019 at Sarah Bush Lincoln Health Center in Mattoon, IL. A funeral service in his honor will be held at 1:00 P.M., Friday, April 12, 2019 at Mitchell-Jerdan Funeral Home, 1200 Wabash Avenue, Mattoon, IL 61938; Reverend Don Pankey will officiate. A committal service will follow in Dodge Grove Cemetery. A visitation will be held Thursday evening, April 11, 2019 from 5:00-8:00 P.M. at the funeral home. Noah was born on January 13, 1936 in Posey County, IN, the son of the late Charles L. and Leota R. (Hamilton) McFadden. He married Shelby “Jean” Woodard on February 29, 1956. He is survived by his wife, Jean McFadden of Mattoon, IL; four children, Theresa A. Tilford and husband John of Mattoon, IL, Cheryl K. Brown of Mattoon, IL, Vicky L. Culp and husband Marty of Arcola, IL, Robert L. McFadden and wife Liza of Fairfield, OH; eleven grandchildren; thirteen great-grandchildren; and one sister, Martha G. Thompson of Lerna, IL. He is preceded in death by his parents; one brother, Paul E. McFadden; one son, Charles A. McFadden; one daughter-in-law, Tina McFadden; and one grandson, Marine Corporal Derek Edinger. Noah was employed by National Cash Register and former employee of Illinois Central Rail Road. He was a devout member of Winebrenner Church of God in Mattoon, IL. He enjoyed flower and vegetable gardening. He had a passion for painting and had over one hundred paintings similar to the style of Bob Ross. Noah treasured his weeklong fishing trips with his brother-in-law and admired his beloved horse, Champ. Above all, Noah’s favorite time was when he was with his family and made many memories with his children and grandchildren. Memorials in his honor may be made Winebrenner Church of God, 300 Illinois Avenue, Mattoon, IL 61938 or Coles County Animal Shelter, 6818 N. Co. Rd 1120 E. Charleston, IL 61920. Please visit www.mitchell-jerdan.com or www.facebook.com/mitchelljerdanfuneralhome to light a virtual candle or share a memory with the family.

The family of Noah E. McFadden created this Life Tributes page to make it easy to share your memories.

Send flowers to the McFadden family.