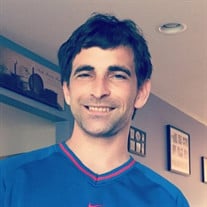 Nathan E. Tipsword, age 32 of Mattoon, IL tragically passed away September 14, 2021, at Lake Shelbyville in Shelbyville, IL. A funeral service in his honor will be held at 1:00 PM, Friday, September 24, 2021, at Mitchell-Jerdan Funeral Home, located at 1200 Wabash Avenue, Mattoon, IL 61938; Pastor Ryan Mulvaney will officiate. The visitation will be held the same day from 11:00 AM until the time of service at the funeral home. Burial will take place at a later date in Dodge Grove Cemetery in Mattoon, IL. Nathan was born on July 16, 1989, in Mattoon, IL, the son of Billy G. Tipsword Sr. and Anita L. Hampton. He is survived by his loving mother, Anita L Watkins and her husband Stephen of Mattoon, IL.; his father, Billy Tipsword Sr. of Mattoon, IL; maternal grandparents, Marion and Dorothy Hampton of Trilla, IL; three brothers, Billy Tipsword Jr. and wife Robin, Donald Tipsword, Daniel Tipsword, all of Mattoon, IL; one sister, Brittney Tipsword of Mattoon, IL; numerous aunts and uncles; many beloved cousins; and his three best friends, Chad Chapman, Avin Waldrop, and Bruce Mcginness, all of Mattoon, IL. He was preceded in death by his paternal grandparents, William and Nancy Tipsword. Nathan was a graduate of Mattoon High School Class of 2008, where he actively competed for the MHS wrestling team. He later became employed at Tate and Lyle Grain Elevator at Coles Station. Spending time outdoors, woodworking, camping, boating, and fishing were moments Nathan enjoyed the most. Nathan had a charming personality and always quick with a joke, he made a lasting impression on everyone lucky enough to meet him. Selfless and a heart of gold, Nathan helped others without hesitation. He truly was a man who marched to the beat of his own drum. He was a loving son, brother, grandson, nephew, cousin, and loyal friend. Nathan loved being surrounded by his family and making memories that will last forever in the hearts of his loved ones. Memorials in Nathan’s honor may be made to the family in care of Mitchell-Jerdan Funeral Home. Please visit www.mitchell-jerdan.com or www.facebook.com/mitchelljerdanfuneralhome to light a virtual candle in his honor or share a memory with the family.

The family of Nathan E. Tipsword created this Life Tributes page to make it easy to share your memories.

Send flowers to the Tipsword family.