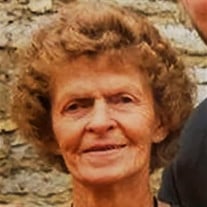 Modelle Cloyd, age 90 of Humboldt, IL passed away at 3:15 AM, Saturday, January 18, 2020 at Odd-Fellow Rebekah Home in Mattoon, IL where she had resided since March 2015 after suffering a major stroke. A funeral service in her honor will be held at 10:00 AM, Wednesday, January 22, 2020 at Mitchell-Jerdan Funeral Home, 1200 Wabash Avenue, Mattoon, IL 61938; Reverend Dave Ferguson will officiate. A committal service will immediately follow at Pleasant Grove Cemetery in Cooks Mills, IL. A visitation will be held Tuesday, January 21, 2020 from 2:00 PM-7:00 PM at the funeral home. On November 22, 1929, Modelle Hammer came into the world, the third child of Ferry White Hammer and Mary Belle (Ross) Hammer. Older siblings were Royce Dicken and Nelda Kathleen. Born in the Meshack Community of Monroe County Kentucky, siblings Elizabeth Ann, Rex Ross, Reggie Allan, and Helen Louise would follow. On November 7, 1947, Modelle married Roy Delbert Cloyd of Tompkinsville, Kentucky. The young newlyweds then moved to Illinois, settling first in Cooks Mills where they developed many close friendships that lasted throughout their lives. Later, Roy and Modelle moved to the Toledo, Illinois area where they lived for 15 years before moving back to Cooks Mills. Their first daughter, Janeth Anne, arrived December 28, 1952, Sheila Jo was born on January 22, 1957 and Diana Lynn on March 7, 1960. The family enjoyed outdoor activities such as gardening, horseshoes, badminton and softball. They especially enjoyed their twice-yearly trips back to Kentucky to visit family. Modelle worked hard at home and held various part-time jobs. She also worked full-time at General Electric and retired from there in 1995 after a total of 30 years employment. Modelle enjoyed her work there and developed close friendships. Upon retirement she enjoyed membership at the Mattoon YMCA, traveling with friends, and volunteering with her church, the Sarah Bush Lincoln Hospital and the Mattoon Bagelfest. Modelle was a member of the Lakeland Church of Christ. Living a Christian life was very important to her. She took her daughters to church by herself until Roy was baptized and began attending with them. The faithfulness of her family today is due in large part to her influence and example. Surviving are Modelle’s daughters: Janeth O’Dell and husband Dwight of Mt Pleasant, South Carolina; two grandchildren, Andria O’Dell and Jordan and wife Jenee O’Dell; three great- grandchildren, Kirstyn Canull and husband Jake, Reagan and Bransen Eppes. Sheila Cobb and husband Bill of Humboldt, Illinois; two grandchildren, Tyler Cobb and wife Christine, and Chalice Phillips and husband Darwin; two great- grandchildren, Feride Phillips and Elsie Cobb. And Diana Greene of Indianapolis, Indiana; three grandchildren, Kayla Greene, Jennifer Avrit and husband Christopher, and Alexander Greene; two great- grandchildren, Gabriel and Aria Avrit. Also surviving are her sisters, Elizabeth Smith and Helen (Harold) Payne and a brother Rex (Bea) Hammer; sisters-in-law Mary L. Hammer and Mary Ann Hale and several nieces and nephews. She was preceded in death by her husband, Roy in 1988, her parents, three siblings, Royce Dicken (Ruby) Hammer, Kathleen (Wayne) Hendrick, Reggie Hammer and a son-in-law, Michael Greene. We wish to thank all of those who have been loving and supportive during these last few years at Odd Fellows. Memorials may be made to Lake Land Church of Christ, 3840 US-45 N, Mattoon, IL 61938 or Mattoon Area Family YMCA, 221 N 16th Street, Mattoon, IL 61938 or the charity of the donor’s choice. Please visit www.mitchell-jerdan.com or www.facebook.com/mitchelljerdanfuneralhome to light a candle in her honor to share a memory with the family.

Modelle Cloyd, age 90 of Humboldt, IL passed away at 3:15 AM, Saturday, January 18, 2020 at Odd-Fellow Rebekah Home in Mattoon, IL where she had resided since March 2015 after suffering a major stroke. A funeral service in her honor will... View Obituary & Service Information

The family of Modelle Cloyd created this Life Tributes page to make it easy to share your memories.

Send flowers to the Cloyd family.