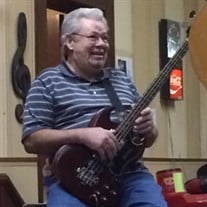 Milo “Tom” Sawyer, age 78 of Mattoon, IL passed away at 5:31 A.M. Friday, April 5, 2019 at Carle Foundation Hospital in Urbana, IL. A funeral service in his honor will be held at 2:00 P.M., Wednesday, April 10, 2019 at Mitchell-Jerdan Funeral Home, 1200 Wabash Avenue, Mattoon, IL 61938; Pastor Steve McCann will officiate. A committal service will immediately follow in Roselawn Cemetery in Charleston, IL. A visitation will be held Tuesday evening, April 9, 2019 from 5:00 P.M.-8:00 P.M. at the funeral home. Tom was born on April 29, 1940 in Paradise Township in Coles County, the son of Milo and Marie (Patterson) Sawyer. He married Brenda K Leonard on May 5, 1970 in Charleston, IL. He is survived by his wife, Brenda Sawyer of Charleston, IL; four children, Aaron Sawyer and wife Cindy of Mattoon, IL, Sharon Sawyer of Mattoon, IL, Shelly Birch of Bushton, IL, Todd Sawyer and wife Shelly of Charleston, IL; several grandchildren and great grandchildren; two brothers, Dick Sawyer and wife Deborah of Coal City, IL, Max Sawyer of Mattoon, IL; one sister, Karen Mallock and husband Ron of Lake Mattoon, IL; and many nieces and nephews. Tom is preceded in death by his parents; two sisters, Margaret and Marilyn; and two brothers, Marion and Ed. Tom worked at Tube-Lok Products in Mattoon, IL as an inspector, welder, and foreman. He was later employed by Vesuvius in Charleston, IL where he retired. Tom had a passion for music and loved to perform for others. He played bass guitar sang in many country bands throughout the years. He was a skilled mechanic and enjoyed restoring his John Deere. Tom knew the Lord and was baptized later in life. He fought cancer three times, being victorious through Jesus. Tom’s pain is gone and he is home now with his family in Christ. He was loved by many and will be missed. Tom was a loving and kind-hearted man. Memorials in Tom's honor may be made to the family in care of Mitchell-Jerdan Funeral Home. Please visit www.mitchell-jerdan.com or www.facebook.com/mitchelljerdanfuneralhome to light a virtual candle in his honor or share a memory with the family.

The family of Milo "Tom" Sawyer created this Life Tributes page to make it easy to share your memories.

Send flowers to the Sawyer family.