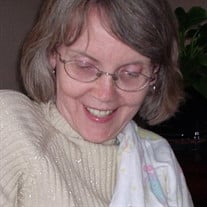 Mattoon, IL – Michelle A Gunning(nee McKenzie), age 70, of Champaign, IL, formally of Edmonton, AB Canada passed away at 7:45 p.m., Saturday, June 25, 2016, at Palm Terrace of Mattoon. The memorial service in her honor will begin at 10:00 a.m., Thursday, July 7, 2016 at Westlawn Funeral Home, 16310 Stony Plain Road, Edmonton, AB. Interment will follow in Westlawn Memorial Gardens. Born February 10, 1946, in Winnipeg, Manitoba, Canada, Michelle was the daughter of Alexander and Charlotte (Trembley) McKenzie. She married Don Gunning in Winnipeg, MB on March 9, 1972. He survives. Other survivors include three daughters, Lynne Magnusson and her husband Mike of Calgary, AB, Caroline Erickson and her husband Brad of Victoria, BC, Allyson Gunning of Edmonton, AB;6 grandchildren, Ammon Magnusson, Connor Magnusson, and Samantha Magnusson all of Calgary, AB, Anna Erickson, Lucy Erickson, and Charlotte Erickson of Victoria BC; three brothers Paul McKenzie of Ottawa, ON, J. Dennis McKenzie of Nanaimo, BC, and John McKenzie and his wife Betty of Winnipeg, MB and one sister Pat Mckenzie and her husband Jerry of Winnipeg, MB. Michelle earned her associates degree from Red River community college. She was a homemaker and attended St. Patrick Catholic Church in Champaign, IL. She was also a former member of Annunciation Catholic Church in Edmonton, AB where she loved to teach Sunday school. In her free time, Michelle enjoyed crafting, and was involved with various social clubs; however her family was her life, and she cherished time spent with them. She was a devoted wife, a loving mother, and an adoring grandmother. Please visit www.mitchell-jerdan.com or www.facebook.com/mitchelljerdanfuneralhome to light a virtual candle in her honor or share a memory with her family. In lieu of flowers, donations to the Alzheimer’s Society are appreciated.

The family of Michelle A Gunning created this Life Tributes page to make it easy to share your memories.

Send flowers to the Gunning family.