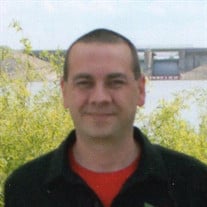 Michael David VanMatre, age 47 of Neoga, IL passed away at 3:35 PM, Wednesday, December 15, 2021, at his residence in Neoga, IL. A funeral service in his honor will be held at 6:00 PM, Monday, December 20, 2021, at Mitchell-Jerdan Funeral Home, 1200 Wabash Avenue, Mattoon, IL 61938. Brother Greg Swango will officiate with the assistance of Brother Bill Livesay. Military Rites will be conducted by Mattoon VFW Post 4325 at 3:30 PM. The visitation will be held from 4:00 PM until the time of service at the funeral home. Michael was born on September 11, 1974, in Mattoon, IL to Max Albert and Mary Lou (Spear) VanMatre. He is survived by his parents of Mattoon, IL; three children, Clayton T. Krutsinger of Sigel, IL, Sage C. Thode of Mattoon, IL, Ashton M. Sharp of Neoga, IL; one brother, Matt R. VanMatre of Mattoon, IL; one sister, Melinda S. Hohmann and husband Aaron of Willow Springs, NC; one granddaughter, Everleigh M. L. Thode of Mattoon, IL; three nephews, Noah P. Hohmann, Brayden M. Hohmann, and Callen V. Hohmann all of Willow Springs NC; He was preceded in death by his grandparents. Michael was a true patriot for our great nation and honorably served in the United States Air Force from 1992 until 1996, later he was a part of the Air National Guard in Terre Haute, IN. He was a member of Lakeland Church of Christ in Mattoon, IL. As a talented pool player, Michael belonged to the American Poolplayers Association (APA) and competed in various competitions. He liked spending time with his boys working on cars, bowling, fishing, and playing poker. Always one to take initiative, Michael jumped to solving any problem and helping all individuals he could. He was selfless and loving. His children and grandchildren were his pride and joy. He will always be missed and lovingly remembered Memorials in his honor may be made to the American Diabetes Association, PO Box 7023, Merrifield, VA 22116-7023 Please visit www.mitchell-jerdan.com or www.facebook.com/mitchelljerdanfuneralhome to light a virtual candle in his honor or share a memory with the family.

The family of Michael David VanMatre created this Life Tributes page to make it easy to share your memories.

Send flowers to the VanMatre family.