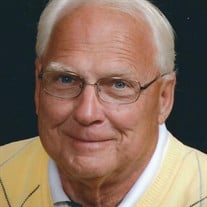 Mattoon, IL - Michael J. Ramage, 70, of Mattoon, IL, passed away at 11:37 AM on Monday, February 29, 2016 at St. John’s Hospital in Springfield, IL. A funeral Mass in his honor will be celebrated on Friday, March 4 at 10:00 AM at Immaculate Conception Church. Father John Titus will officiate. A graveside burial will be held immediately thereafter at Calvary Cemetery. Military rites will be conducted by the Mattoon VFW Post 4325. A luncheon reception at the Immaculate Conception Parish Center will follow. A private family rosary service will be conducted at 3:30 p.m., Thursday, March 3, 2016. The family will receive friends from 4:00-7:00 PM, Thursday, at Immaculate Conception Church. Mitchell-Jerdan Funeral Home, located at 1200 Wabash Avenue, Mattoon, IL 61938, is assisting the family with arrangements. Mike was born in Mattoon, IL on November 20, 1945, the son of J.E. Evans Ramage and Mary Jane (Keene) Ramage. He married Elizabeth S. “Sue” Barber on January 11, 1969 at St Mary of The Assumption Catholic Church in Neoga, IL. She survives. Mike graduated from St. Mary School in 1959 and Mattoon High School in 1963. He earned his Associates in Science at Lake Land College in 1976 and his Bachelor’s Degree, Board of Governor’s Program, in 1977, from Eastern Illinois University, both while attending night school and working full time with small children. Mike was thankful to his Country for the GI Bill that provided him these opportunities. Mike proudly served his Country in the U.S. Air Force from 1966 - 1970 and served a tour in Viet Nam from 1967-1968. He was a Disabled Veteran. After completing his military service in March 1970 at the rank of E-4, he and Sue moved back to Mattoon from Mike’s final military station at Travis AFB in Vacaville, California. Mike began working for the U.S. Postal Service, where he worked for 36 years, until his retirement in 2006. Mike worked his way up from a letter carrier, and then window clerk, to Postal Supervisor. Mike also held many interim Postmaster and supervisory assignments. Though he had many opportunities to accept permanent, out of town promotions, Mike never wanted to leave Mattoon or not be able to have daily lunch with his wife, Sue. In addition, Mike and Sue operated the St. Mary’s and Postal Credit Union out of their home for 25 years. Mike was a long time member of the Immaculate Conception Church and was a Eucharistic Minister, past President of the Parish Council and Parents Guild, and volunteer for many church projects. Mike was proud of the Catholic education provided by St. Mary School to several generations of Ramages. Mike was a former girls’ softball coach, Meals on Wheels volunteer, Charter YMCA Member, as well as a member of the Knights of Columbus, Coles County Right to Life, American Legion, VFW, and Disabled Veterans. Mike was also a current member of the City of Mattoon Zoning Board. Mike was a die-hard Cubs fan. He loved traveling to watch his children play high school sports and collegiate tennis, but he and Sue had a special affinity for traveling to watch their grandchildren play sports throughout the Midwest. Mike and Sue loved to travel, and during the last 10 years, they traveled abroad and all throughout the Country. Mike & Sue loved spending time with their children and grandchildren. Mike was preceded in death by his parents, JE in 1964 and Mary Jane in 1996, and his sister, Julia (Ramage) Henne, in 2008. He is survived by his wife Sue; son Andy (wife, Roxanne, and children Jack, John Michael, and Kate) of Springfield; daughter Theresa Gowin (husband Jason, and children Alex, Keegan and Logan) of Charleston; daughter Sarah Powers (husband, Greg, and children Blaine, Blair, and Belle) of Mattoon; and son, Matt (wife, Jen, and children Julia, Joseph, Natalie and expectant child) of Atchison, KS. Mike is also survived by brother James “Keene” (wife, Sharon) of Centerville, OH; , sister Jane Strong (husband, Kenny) of Spring, TX; Pat (wife, Pam) of Mattoon; and brother Tom of Spring, TX; brothers-in-law Jerry Barber of Sitka, AK, Steve (Sue) Hansen-Barber of Cour-d’Alene, ID and sisters-in-law Julie (Vince) Holtkamp of Centralia, Melissa (Dan) Kelly of Urbana and Mary (Ben) Reynolds of Springfield, as well as many nieces, nephews and cousins. Memorial Contributions may be made to St. Mary School, 2000 Richmond Avenue or the Alzheimer’s Association of Greater Illinois 8430 W Bryn Mawr Ave # 800, Chicago, IL 60631. Please visit www.mitchell-jerdan.com or www.facebook.com/mitchelljerdanfuneralhome to light a virtual candle in his honor or share a memory with his family.

The family of Michael J. Ramage created this Life Tributes page to make it easy to share your memories.

Send flowers to the Ramage family.