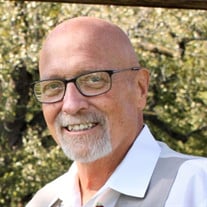 Michael Earl Lucier, age 66 of Mattoon, IL passed away Saturday, January 8, 2022, in his home surrounded by his loved ones after a two year long battle with cancer. A funeral service in his honor will be held at 1:00 PM on Thursday, January 13, 2022, at Mitchell-Jerdan Funeral Home, 1200 Wabash Avenue, Mattoon, IL 61938. Pastor Brad Brown will officiate. A committal service will immediately follow at Dodge Grove Cemetery in Mattoon, IL. The visitation will be held the same day from 10:00 AM until the time of service at the funeral home. Mike was born on July 5, 1955, in Mattoon, IL to James and Juletta (Koeble) Lucier. He is survived by his wife, the love of his life, Sandy (Rich) Lucier; his son, Tyler Lucier with wife Heidi of Mattoon, IL; daughter, Alexa Lucier-Reynolds with husband Hunter of Mattoon, IL; daughter, Gretchen Lucier of Minneapolis, MN; his four grandchildren: Isabelle and Bryson Lucier of Mattoon, IL, Emma and Isabelle Lucier of Minneapolis, MN; his sister-in-law, Kim (Mark) Welton of Mattoon, IL and their daughter Macey of Mattoon, IL; his sister, Marriane (Denny) Best of Morris, IL; sister Kathy (Terry) Prentice of Foley, AL; sister, Michelle (Steve) Servis of Morris, IL; as well as many nieces and nephews. He is preceded in death by his father and mother, niece Jami Manning, as well as uncles and aunts. Mike lived his entire life in Mattoon, IL and graduated from Mattoon High School in 1972. He went to work at RR Donnelley/LSC Communications as a supervisor, where he retired from after 48 years of dedicated service. He married his beautiful wife Sandy on May 11, 1983, which he loved tremendously. In his spare time, you could find him outside enjoying the sunshine in his hammock, fishing, driving around in his jeep, traveling with his family, or woodworking. He enjoyed spending time with his wife, children, and grandchildren, especially on their many vacations to Pensacola, FL, which was his favorite destination. Mike also enjoyed every sporting event his children and grandchildren participated in. When it came to football season, you could always hear Mike cheering on his beloved, Green Bay Packers. He was also a Jimmy Buffett fan. His family would say that there wasn’t anything that Mike couldn’t fix or do. He was incredibly hardworking and outgoing. His battle with cancer rarely dampened his spirits or his determination to keep fighting on. Mike will be sincerely missed by everyone that knew him, as he was a light in any room he entered. Memorial gifts in his honor may be made to SBL Regional Cancer Center, 1001 Health Center Dr., Mattoon, IL 61938. Please visit www.mitchell-jerdan.com or www.facebook.com/mitchelljerdanfuneralhome to light a virtual candle in his honor of share a memory with the family.

Michael Earl Lucier, age 66 of Mattoon, IL passed away Saturday, January 8, 2022, in his home surrounded by his loved ones after a two year long battle with cancer. A funeral service in his honor will be held at 1:00 PM on Thursday, January... View Obituary & Service Information

The family of Michael Earl Lucier created this Life Tributes page to make it easy to share your memories.

Send flowers to the Lucier family.