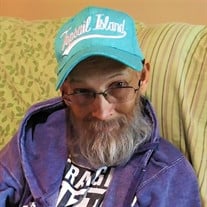 Michael E. Henderson, age 49 of Mattoon, IL passed away at 11:12 AM, Wednesday, July 29, 2020 at his residence surrounded by his family. A Celebration of Life will be held at a later date. Mitchell-Jerdan Funeral Home, located at 1200 Wabash Avenue, Mattoon, IL 61938 is in charge of services. Mike was born on June 30, 1971 in Mattoon, IL the son of the late Albert E. and Gloria L. (Scholer) Henderson. He married Kyla Kingery on December 15, 1997 in Charleston, IL. He is survived by his loving wife, Kyla Henderson of Mattoon, IL; three sons, Kaemon Henderson and fiancée Alexandria Earnst of Mattoon, IL, Albert Henderson and wife Shannon of Jacksonville, NC, and Tyler Henderson and fiancée Kirsten White of Mattoon, IL; one granddaughter, Valkyrie Henderson of Jacksonville, NC; one brother, Ronald Henderson of Texas; one sister, Nancy Henderson of Mattoon, IL; and mother-in-law, Linda Kingery of Mattoon, IL. Mike was an avid sports fan and loved cheering on the Chicago Cubs, Blackhawks, and Seattle Seahawks. Some of his favorite moments were spent with his family camping in the backyard and cherishing the conversations and laughter around the campfire. With his charming and loving personality, Mike was affectionately known as “Uncle Mike” to many. He will be remembered as a loving husband, doting father, grandfather, and dear friend. The family would like to give special thanks to Gavin White, Alexandria Earnst, and Tina Lee for all the love and care they provided for Mike. Memorials in Michael’s honor may be made to the family in care of Mitchell-Jerdan Funeral Home. Please visit www.mitchell-jerdan.com or www.facebook.com/mitchelljerdanfuneralhome to light a virtual candle in his honor or share a memory with the family.

Michael E. Henderson, age 49 of Mattoon, IL passed away at 11:12 AM, Wednesday, July 29, 2020 at his residence surrounded by his family. A Celebration of Life will be held at a later date. Mitchell-Jerdan Funeral Home, located at 1200 Wabash... View Obituary & Service Information

The family of Michael E. Henderson created this Life Tributes page to make it easy to share your memories.

Send flowers to the Henderson family.