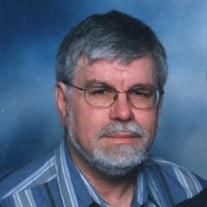 Michael R. Harris, age 66 of Trilla, IL passed away Saturday, September 18, 2021, at Carle Foundation Hospital in Champaign- Urbana, IL. A funeral service in his honor will be held at 1:00 PM, Saturday, September 25, 2021, at Mitchell-Jerdan Funeral Home, 1200 Wabash Avenue, Mattoon, IL 61938; Pastor Gerhard Warman will officiate. Burial will be held at a later date. The visitation will be held the same day from 12:00 PM until the time of service at the funeral home. Michael was born on August 24, 1955, in Mattoon, IL to the late William H. and Betty J. (Craig) Harris. He married Debbra E. Newlin on July 13, 1974. He is survived by his wife, Debbra E. Harris of Trilla, IL; one daughter, Ashley Best of Trilla, IL and her boyfriend Lee Jansen of Watson, IL; two sisters, Judy Warman and husband Gerhard of Mattoon, IL; Pat Stuckey and husband Henry of Springfield, IL; and a “bonus” daughter, Keashia Pettyjohn of Mattoon, IL and her two children, Christian and Conner Pettyjohn. He was preceded in death by one son-in-law, Colin Best. Michael was a former employee of City of Mattoon Dodge Grove Cemetery and JJ Collins Printing of Charleston, IL. He liked to spend time in mother nature, fishing and hunting were some of his favorite activities. His hobbies included collecting toy tractors and model trains, a passion he had for many years. Michael loved his family and was a great friend to many. He will be greatly missed. Memorials in his honor may be made to the family in care of Mitchell-Jerdan Funeral Home. Please visit www.mitchelljerdan.com or www.facebook.com/mitchelljerdanfuneralhome to light a virtual candle in his honor or share a memory with the family.

The family of Michael R. Harris created this Life Tributes page to make it easy to share your memories.

Send flowers to the Harris family.