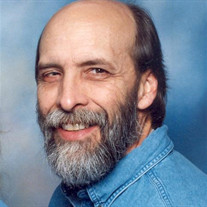 MATTOON -- Michael Paul Brandt, “Bear”, age 58, of Mattoon, IL, passed away at 7:20 a.m., Monday, March 14, 2016, at his residence. A memorial service in his honor will begin at 12:00 p.m., Saturday, March 19, 2016, at Mitchell-Jerdan Funeral Home, 1200 Wabash Avenue, Mattoon, IL, 61938. Gregory L. Brandt will officiate. Visitation will be held at the funeral home from 10:00 a.m. until the service begins. Born in Mattoon, IL, on June 13, 1957, Michael was the son of Gary L. and Sylvia J. (Stallard) Brandt. He married Kathy M. Stranko on March 29, 1981. He is survived by his loving wife of 34 years, Kathy Brandt of Mattoon, IL; his mother, Sylvia J. Brandt of Edwardsville, IL; two children: Amanda M. Brandt of Mattoon, IL, and Chad A. Davis and wife Kim of Sullivan, IL; two brothers: Gregory L. Brandt and Christopher E. Brandt, both of St. Louis, MO; four grandchildren: Corinne and Arianna Davis of Mattoon, IL, and Shelby and Zoey Barker of Sullivan, IL; four nephews: Matthew Brandt, Jeremy Stranko and wife Stephanie, Tony Rieck, and Jeff Rieck; five nieces: Lauren Brandt, Sarah Eggleton and husband Korey, Lorraine Guentzel and husband Andy, Jennifer Stranko, and Kami Rieck; a brother in law, Larry Stranko and wife Kelly of Mattoon, IL; and a very special aunt, Dianne Funkhouser (Sam) of Highland, Ill.; and his grand-dog, Tanner Joe Brandt. He was preceded in death by his father. Michael earned his living as a carpenter with Local 347. He was a member of the First United Methodist Church of Mattoon, IL, a lifetime member of the Sons of the American Legion, and former member of the Eagles and Moose both of Mattoon. Bear, as he was more commonly known, loved the game of football and was a devoted fan of the Pittsburgh Steelers and Fighting Illini. He was also a fan of the St. Louis Cardinals, enjoyed fishing, and spending time at the Meadowview Golf Course. Christmas was, by far, his favorite holiday. He enjoyed the Christmas spirit so much so that he was known to begin playing Christmas music two months early. His hobbies included collecting Grinch and Emmett Kelley figurines. Memorials in his honor may be made to the St. Jude Children’s Research Hospital, www.stjude.org, 501 St Jude Place Memphis, TN 38105, or the ALS Foundation for Life, www.alsfoundation.org, P.O. Box 96 Natick, MA 01760. Please visit www.mitchell-jerdan.com or www.facebook.com/mitchelljerdanfuneralhome to light a virtual candle in his honor or share a memory with his family.

The family of Michael Paul Brandt, "Bear" created this Life Tributes page to make it easy to share your memories.

Send flowers to the Brandt family.