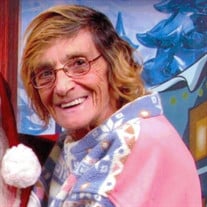 Marylou Anderson-Nation age 69 of Mattoon, IL passed away on Sunday, February 23, 2020 at Sarah Bush Lincoln Hospital, Mattoon, IL. A private memorial service will be held at a later date. Mitchell-Jerdan Funeral Home, located at 1200 Wabash Avenue, Mattoon, IL 61938 is in charge of arrangements. She was born on April 9, 1951 in Mattoon, IL, the daughter of Ivan W. Stewart and Mary B. Sydenstricker. Marylou is survived by her Fiancé Dan Cox of Charleston, IL; three sons, William M. Anderson of Mattoon, IL, Wayne E. Anderson of Mattoon, IL, Brian E. Anderson of Charleston, IL; two brothers, George Stewart and wife Judy of Terre Haute, IN, John Stewart and wife Kallie of Indianapolis, IN; two sisters, Kathryn Sims and husband Tony of Mattoon, IL, Sara Croy and husband Ron of Charleston, IL. Marylou was preceded in death by her parents, one daughter, Mary M. Anderson, two sisters and one brother. Marylou attended Fields Church in Mattoon, IL. She took great pride in caring for her family and home, being a devoted mother and grandmother who enjoyed spending time with her family. She will be greatly missed and lovingly remembered. Please visit www.mitchell-jerdan.com or www.facebook.com/mitchelljerdanfuneralhome to light a virtual candle in her honor or share a memory with the family.

The family of Marylou Anderson-Nation created this Life Tributes page to make it easy to share your memories.

Marylou Anderson-Nation age 69 of Mattoon, IL passed away on...

Send flowers to the Anderson-Nation family.