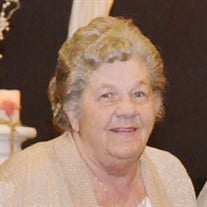 Mary E. Siford-Knight, age 75 of Mattoon, IL passed away at 7:30 PM, January 10, 2020 at Carle Foundation Hospital in Urbana, IL. A memorial service in her honor will be held at a later date. Mitchell-Jerdan Funeral Home, located at 1200 Wabash Avenue, Mattoon, IL 61938 is in charge of services. Mary was born on May 31, 1944 in Richardton, North Dakota, the daughter of the late Raphael and Catherine (Meyer) Goetzfridt. In 1962, Mary married Kenneth Jabs and later divorced in 1970. She then married Richard J. Siford; he passed away on September 5, 2000. Mary later married James S. Knight, Jr. in Mattoon, IL; he preceded her in death on September 1, 2010. She is survived by one son, Russell E. Jabs and wife Dawn of Mattoon, IL; three grandchildren, Austin Jabs and wife Hayley of Neoga, IL, Ashley LaBoube and husband Jonathan of Tulsa, OK, Andrea Orr and husband Nick of Mattoon, IL; six great-grandchildren: McKinley Jabs, Chantry, Chase, Maverick LaBoube, Mayzie and Madden Orr; and one brother, Bernard Goetzfridt of Texas. Mary is preceded in death by one sister, one brother, and two sons, Rick A. Jabs and Brian J. Siford. Mary was a member of the Immaculate Conception Catholic Church in Mattoon, IL. She was employed at Wal-Mart as a customer service agent before her retirement in 2010. She was former member of Mattoon Eagles Club and Moose Lodge. Mary’s hobbies included playing rummy, knitting, and doing puzzles. Her favorite pastimes were spent with her family and cat, Frankie. Mary touched the lives of many and will be lovingly remembered. Please visit www.mitchell-jerdan.com or www.facebook.com/mitchelljerdanfuneralhome to light a virtual candle in her honor or share a memory with the family.

Mary E. Siford-Knight, age 75 of Mattoon, IL passed away at 7:30 PM, January 10, 2020 at Carle Foundation Hospital in Urbana, IL. A memorial service in her honor will be held at a later date. Mitchell-Jerdan Funeral Home, located at 1200 Wabash... View Obituary & Service Information

The family of Mary E. Siford-Knight created this Life Tributes page to make it easy to share your memories.

Send flowers to the Siford-Knight family.