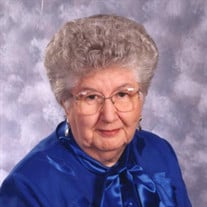 Mary M. Sheppard, age 95 of Mattoon, IL passed away at 1:53 PM, Sunday, May 30, 2021 at Sarah Bush Lincoln Health Center in Mattoon, IL. A funeral service honoring her life will be held at 1:00 PM, Thursday, June 3, 2021, at Mitchell-Jerdan Funeral Home located at 1200 Wabash Avenue, Mattoon, IL 61938. A committal service will immediately follow at Dodge Grove Cemetery. Pastor Ron Dickinson will officiate. A visitation will be held at 12:00 PM until the time of service at the funeral home. Born April 27, 1926, in Indianola, IL, Mary was the daughter of Raymond and Love (Bostwick) Orrick. She married Roy Eugene Sheppard on June 2, 1946, in Chrisman, IL; he preceded her in death on June 16, 1989. She is survived by their daughter, Marsha Lynn Koets and husband Gary of Mattoon, IL; their son, David Eugene Sheppard and wife Becky (Replogle) of Whitney, TX; five grandchildren; Tracie Tomlin and husband Jared of Normal, IL, Jennifer Heller of Brunswick, GA, Rebecca Koets of Jacksonville, FL, Jessica Kidd and husband Jeremy of Loveland, CO, Christopher Sheppard and wife Laura of China Spring, TX; and ten great-grandchildren: Madison, Mason, Makeon and Maxton Tomlin of Normal, IL, Lily, Leo, and Lucy Heller of Brunswick, GA, Madelyn Lowery of Loveland, CO, Avery and Cora Sheppard of China Spring, TX. She was preceded in death by two brothers, Kenneth Ray Orrick and Ralph Leon Orrick; and one sister, Betty Ruth Orrick. Mary retired from the Mattoon Public Library in 1991. She was an active and dedicated member of the First United Methodist Church in Mattoon, IL since 1952 where she was past President of United Methodist Women, and Mary Circle. In the early years, she was a teacher for Children’s Church and participated in numerous bible studies. She was the Past Regent of Governor Edward Coles- Sally Lincoln Chapter Daughters of the American Revolution in Mattoon, IL. Mary was a fifty-year member of the Eastern Star Chapter at Danville, IL. For several years she was active in the Salvation Army Women’s Organization. Mary was a lifelong member of several literary clubs, including: the Past President of Tuesday Study Club and the Quadrangle Club. In 1989 she was named Woman of the year by the Mattoon Business and Profession Women’s Club. She was a member of Friends of the Mattoon Public Library. Memorial donations honoring Mary may be made to the Building Fund at Mattoon First United Methodist Church, 1601 Charleston Avenue, Mattoon, IL 61938. The family would like to thank the Brookstone Estates South staff and Sarah Bush Lincoln Health Center for their loving care, support, and dedication to caring for Mary. Please visit www.mitchell-jerdan.com or www.facebook.com/mitchelljerdanfuneralhome to light a virtual candle in her honor or share a memory with the family.

The family of Mary M. Sheppard created this Life Tributes page to make it easy to share your memories.

Send flowers to the Sheppard family.