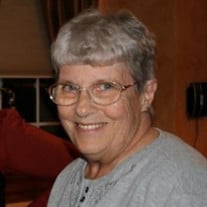 Mary Elizabeth “Molly” Grady (Letzelter) completed her journey in life on October 17, 2021, at the age of 85 after a long illness, in the comfort of her home surrounded by friends, family and memories of a life dedicated to all of her children and grandchildren. A funeral mass in her honor will be held at 10:00 AM, Friday, October 22, 2021, at Immaculate Conception Catholic Church, 320 N. 21st Street, Mattoon, IL 61938. Interment will be held immediately thereafter at Calvary Cemetery, with a luncheon at the Immaculate Conception Parish Center immediately following. Visitation will be held from 4:00 PM to 7:00 PM, Thursday, October 21, 2021, at Mitchell-Jerdan Funeral Home, located at 1200 Wabash Ave, Mattoon, IL 61938. Molly was born on May 2, 1936, in Portland, Oregon; the eldest daughter of U.S. Army Colonel Cyril Joseph and Ethel (Williams) Letzelter. As the child of a career military officer, she saw more of the world before she was twenty years old than most see in a lifetime. At different points in her youth, she lived with her family at Vancouver Barracks, Washington, West Point, New York, Omaha, Nebraska, and post-World War II West Germany — where she graduated from high school. In the mid-1950’s, when her father was assigned as the commander of the ROTC program at the University of Notre Dame, she took a job working as a secretary under that University’s famous “golden dome.” It was there that she met the love of her life, a student named Walter Justin Grady. After a courtship that involved attending mass at the various chapels on the campus, they were eventually joined in holy matrimony on January 25, 1958, at Christ the King Church in South Bend, Indiana. After several years in the Chicagoland area, they brought their family south to Mattoon, Illinois in January of 1968 as her husband continued his work as an engineer constructing Interstate 57. It was here that they settled permanently, and she continued her focus on her greatest passion —raising her young family. As her children grew and became ever more independent, she began to turn her lifelong hobbies of knitting, crocheting, needlepoint, and reading books into careers. In the mid-1970s she became a small business owner, owning and operating Molly’s Yarn and Needlecraft Shop in downtown Mattoon. She later converted her skill as a retail manager to bookstores. She was an award-winning store manager for Waldenbooks at Market Place Mall in Champaign, Illinois, and eventually became the manager of the Eastern Illinois University Student Bookstore in Charleston, IL until her retirement in 1996. After her retirement she settled into a busy schedule as a volunteer, leading the modernization of the taxpayer assistance program at the Mattoon Lifespan Center, and serving on the board of the Mattoon Public Library. Her years of volunteer service earned her recognition from the Mattoon Exchange Club as an honoree for their “Book of Golden Deeds,” which included the honor of riding in an open convertible in the 2012 Bagelfest Parade with two of her youngest grandchildren, all of whom thought it was an absolute hoot. She was preceded in death by her beloved husband Walter Justin Grady (1935-1995). She is survived by her siblings, Cyril Joseph Letzelter II of Centennial, CO, and Lucille Smith of West Glover, VT; her four children W. Justin Grady II (Connie Grady) of Mattoon, Elizabeth (Grady) Luskey (Thomas Luskey) of Crosslake, MN, Patrick Grady (Heather Viglielmo) of Aurora, IL; and Michael Grady (Alyson Coffman) of Springfield, Illinois. She is also survived by fourteen grandchildren: Ayla, Cooper, Sean, Riley, Justin, Aidan and Clare Grady; Lauren Montgomery and Hannah Walker; Zachary, Andrew, and Casey Cole; Michelle Gapstur and Samantha Luskey; and six great-grandchildren. In lieu of flowers, the family asks for donations in the name of Molly Grady to either the Illinois Spina Bifida Association at I-SBA.org or the Illinois Shriners at ANSARSHRINE.com. Please visit www.mitchell-jerdan.com or www.facebook.com/mitchelljerdanfuneralhome to light a virtual candle in her honor or share a memory with the family.

Mary Elizabeth &#8220;Molly&#8221; Grady (Letzelter) completed her journey in life on October 17, 2021, at the age of 85 after a long illness, in the comfort of her home surrounded by friends, family and memories of a life dedicated to all of... View Obituary & Service Information

The family of Mary Elizabeth "Molly" Grady created this Life Tributes page to make it easy to share your memories.

Send flowers to the Grady family.