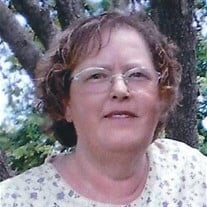 Mattoon, IL – Mary Ellen Applegate, age 59, of Mattoon, IL, passed away at 11:43 a.m., Monday, February 1, 2016, at her residence. The funeral service in her honor will begin at 12:00 p.m., Saturday, February 6, 2016, at Mitchell-Jerdan Funeral Home, 1200 Wabash Avenue, Mattoon, IL, 61938. Reverend Larry Cline will officiate. Interment will follow in Janesville Cemetery, Janesville, IL. Visitation will be held Friday evening from 5:00 to 8:00 p.m. at the funeral home. Born April 11, 1956, in Mattoon, IL, Mary Ellen was the daughter of Charles W. and Viola M. (Reed) Cline. She married Edward “Ed” L. Applegate in Toledo, IL, on July 8, 1990. He survives. Other survivors include a son, Edward Cayce Applegate of Mattoon, IL, and his fiancé Karen Patrick of Charleston, IL; three brothers, Jack Cline, Sr., of Mattoon, IL; Bill Cline of Greenup, IL, and Gary Cline of Ft. Wayne, IN; four grandchildren, Sammuel Applegate of Mattoon, IL, KeAndre Mowell, Tatyana Mowell White, and Keegan Mowell of Altamont, IL; one brother-in-law, Chuck Applegate of New Port Richey, FL; a special niece, Tracy Cox of Warrensburg, IL; and several nieces and nephews. She was preceded in death by her parents; one brother, Hank Cline; and one sister, Carol Simpson. Mary Ellen’s first job was with Mattoon Memorial Hospital as an office worker. She later became an emergency tele-communicator for the Illinois State Police, Ambulance, and Fire departments. She loved every aspect of her job, but especially enjoyed being able to help others. Twice, she was named Illinois State Police Tele-communicator of the Year, and over the years, received many other commendations for her work. As much as Mary Ellen enjoyed her work, her family was her life. She cherished time spent with them. She was a devoted wife, a loving mother, and an adoring grandmother. In her free time, Mary Ellen enjoyed cooking, flower gardening, and poetry. She was a kind and thoughtful woman who never met a stranger. Memorials in her honor may be made to the St. Jude’s Children’s Research Hospital, 262 Danny Thomas Place, Memphis, TN 38105. Please visit www.mitchell-jerdan.com or www.facebook.com/mitchelljerdanfuneralhome to light a virtual candle in her honor or share a memory with her family.

The family of Mary Ellen Applegate created this Life Tributes page to make it easy to share your memories.

Send flowers to the Applegate family.