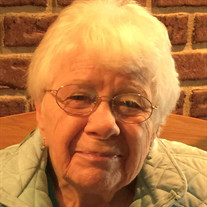 Mary Jean Cole Stone, age 94 of Mattoon, IL passed away at 5:00 AM, Tuesday, August 31, 2021, at her residence in Humboldt, IL. A funeral service in her honor will be held at 4:00 PM, Friday, September 3, 2021, at Mitchell-Jerdan Funeral Home, 1200 Wabash Avenue, Mattoon, IL 61938 with Pastor Mark Thrasher officiating. A committal service will immediately follow at Mt. Zion General Baptist Cemetery in North Okaw Township, Coles County, IL. The visitation will be held from 2:00 PM until the time of service at the funeral home. Jean was born September 16, 1926, to the late Paul D. and Agnus E. (Munson) Daily. She married Leroy Cole on November 1, 1945, and celebrated forty-seven years of marriage before he preceded her in death on March 17, 1992. She later married Lloyd Stone on January 1, 1995, he preceded her in death in 2005. She is survived by two sons, David Cole and wife Nancy of Humboldt, IL, Dennis Cole and wife Lisa of Humboldt, IL; one daughter, Della Brooks of Winfield, IL; seven grandchildren, nine great-grandchildren, two sisters, Lily Griffith, and Shirley Goode; and many nieces and nephews who called her Aunt Jean. She was preceded in death by one son, Doug Cole; four sisters; and two brothers. Raised in rural Arcola, IL, with six sisters and two brothers, Jean attended Senteney School in Coles County, IL and later Humboldt School in Humboldt, IL where she graduated valedictorian of her class in 1944. Jean helped her husband farm and later with the Cole Farm Drainage business. A lifelong member, she was very active in the Mt. Zion General Baptist Church. She was instrumental in forming the Mattoon Parent Group for Mentally Handicapped. She enjoyed ninety-four years of life with her loving family, was a devoted Christian woman to God, church, and family. Jean will be greatly missed by her family and friends. Please visit www.mitchell-jerdan.com or www.facebook.com/mitchelljerdanfuneralhome to light a virtual candle in her honor or share a memory with the family.

The family of Mary Jean Cole Stone created this Life Tributes page to make it easy to share your memories.