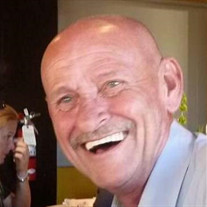 Mattoon, IL – Mark Steven “Steve” Watson, age 60, of Mattoon, IL, passed away at 1:40 a.m., Friday, December 4, 2015, at Mattoon Health Care Center. Private graveside services in his honor will be held at a later date. The family is being assisted by Mitchell-Jerdan Funeral Home, located at 1200 Wabash Avenue, Mattoon, IL, 61938. Born March 1, 1955, in Jacksonville, IL, Steve was the son of Nelson E. and Rosemary (Higgason) Watson. He is survived by his step-father, Merl Volkman of Golden City, MO; a son, Kyle and granddaughter, Stella both of Aubrey, TX; a brother, James Watson and wife Joan of Heath, TX; Two step-brothers, Mark Volkman and wife Lore of Grand Prairie, TX, and Matthew Volkman of Heights, OH; a sister, Mary Morton and husband Mike of Lerna, IL; and three nephews, Todd Morton and wife Brooke of Mattoon, IL, Jeremy Morton and wife Lori of Mattoon, IL and Kyle Watson and wife Hillary of Aubrey TX; three great nephews Josiah, Adrian and Dallas Morton; and two great nieces, Anna and Julia Morton. He was preceded in death by his parents. Mr. Watson served our country with the United States Air Force. He attended the Family Worship Center in Mattoon. Prior to retiring in 2010, he had been employed as a welder. Please visit www.mitchell-jerdan.com or www.facebook.com/mitchelljerdanfuneralhome to light a virtual candle in his honor or share a memory with his family.

The family of Mark "Steve" Steven Watson created this Life Tributes page to make it easy to share your memories.

Send flowers to the Watson family.