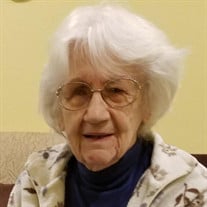 Marjory “Marge” L. Metzger, age 87, of Mattoon, IL, passed away at 3:55 p.m. Tuesday, August 25, 2020, at Life’s Journey Senior Living in Mattoon. A funeral service in her honor will be celebrated on Thursday, September 10, 2020, at 11:00 a.m. at Mitchell-Jerdan Funeral Home, 1200 Wabash Avenue, Mattoon, IL, 61938. A graveside burial will be held immediately after at Mound Cemetery, Charleston, Illinois. The family will receive friends from 10:00 a.m. until the service begins. Marge was born in Charleston on December 23, 1932, to the late Lewin M. and Gertrude D. (Lynch) Neff. She married Clifford “Cliff” W. Metzger on May 17, 1952, in Charleston, IL. He preceded her in death on May 14, 2006. Marge is survived by three daughters: Diana Sullivan and husband, Larry, of Mattoon; Sandra Graven and husband, Tom, of Mattoon; Karen Bellerose and husband, Daniel “Moe,” of Telluride, CO; daughter-in-law, Milli Metzger, of Mattoon; thirteen grandchildren; and twenty five great-grandchildren; and one great-great-grandchild. She was preceded in death by her son, Steven W. Metzger. Marge was a faithful member of the Immaculate Conception Catholic Church in Mattoon. For several years, she was employed as a concession’s auditor for Kerasotes Theatres in Mattoon. Throughout her life, Marge held many memberships including: American Business Women’s Association, Illinois Parent Teacher Association, Mattoon Women of the Moose, Mattoon American Legion Auxiliary, Mattoon Eagles Club, and American Contract Bridge League. She served on the City Council of Mattoon from 1978-1985. She was an avid horsewoman who enjoyed leading trail rides through Shawnee National Forest. Donations in her memory may be made to the Coles County Animal Shelter, 6818 N Co Rd 1120E, Charleston, IL 61920 or charity of your choice. Please visit www.mitchell-jerdan.com or www.facebook.com/mitchelljerdanfuneralhome to light a virtual candle in her honor or share a memory with the family.

The family of Marjory "Marge" L. Metzger created this Life Tributes page to make it easy to share your memories.

Send flowers to the Metzger family.