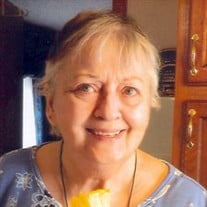 Mattoon, IL-Marion J. Shirley, age 84, of Mattoon, IL, passed away at 10:05 A.M. Friday, December 18, 2015 at Sarah Bush Lincoln Health Center in Mattoon, IL. Private services will be held at a later date. Mitchell-Jerdan Funeral Home, located at 1200 Wabash Avenue, Mattoon, IL, is assisting the family with arrangements. Born on May 15, 1931 in Crookston, MN, Marion was the daughter of Michael and Marian (Pester) Carroll. She is survived by two sons, Steven Shirley of Windsor, IL, Kevin Shirley and his wife Debra of Sullivan, IL; one daughter, Sheree Stone of Mattoon, IL; two brothers, Joe Carroll of Sandoval, IL, and Butch Carroll of Branson, MO; one sister, Pat Crecraft of Pennsylvania; eleven grandchildren; and one great-grandchild. She was preceded in death by her parents; three brothers; and one son, Scott Shirley. Marion was a speech pathologist, earning her Bachelor’s degree in 1975 and her Masters in 1976, both from Eastern Illinois University. She attended Maranatha Baptist Church of Mattoon, IL. She was an avid reader, and loved to track genealogy in her spare time. She also enjoyed traveling and playing cards; however, Marion’s greatest gratification was spending time with family and friends, especially her children, grandchildren, and great-grandchild. Please visit www.mitchell-jerdan.com or www.facebook.com/mitchelljerdanfuneralhome to light a virtual candle in her honor or share a memory with her family.

The family of Marion J. Shirley created this Life Tributes page to make it easy to share your memories.

Send flowers to the Shirley family.