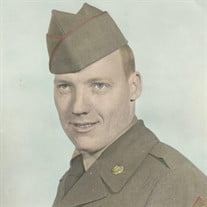 Marion Thomas “Tom” Curtis, age 85 of Champaign, IL passed away at 12:30 A.M., Sunday, April 8, 2018 at Sarah Bush Lincoln Health Center in Mattoon, IL. Military graveside services will be held at 11:00 A.M., Friday, April 13, 2018 at Camp Butler National Cemetery in Springfield, IL. Mitchell-Jerdan Funeral Home, located in Mattoon, IL is assisting the family with services. Tom was born on June 27, 1932 in Chatham, IL to the late Amon and Lorena (Cooper) Curtis. He married Helen M. Cox on November 9, 1958 in Robinson Creek, IL. He is survived by his wife, Helen Curtis of Champaign, IL; two children, Michael A. Curtis of Champaign, IL, Deborah A. Curtis of Champaign, IL; five grandchildren; one brother, Edgar Curtis of Springfield, IL; two sisters, Lola Bryant of Springfield, IL, and Nora McCurly of Springfield, IL. He is preceded in death by one brother, Alvin Curtis. Tom honorably served our country in the Army during the Korean Conflict. He worked at Meadow Gold for over thirty-five years. He enjoyed watching game shows on television and rooting for the St. Louis Cardinals. He will be missed. Please visit www.mitchell-jerdan.com or www.facebook.com/mitchelljerdanfuneralhome to light a virtual candle in his honor or share a memory with the family.

The family of Marion Thomas "Tom" Curtis created this Life Tributes page to make it easy to share your memories.

Send flowers to the Curtis family.