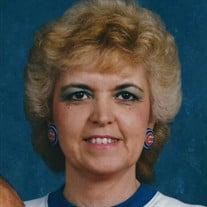 Mattoon, IL – Marie Lynette “Cub Lady” Shewmake, age 71, of Mattoon, IL, passed away at 5:35 p.m., Thursday, April 7, 2016, at Life’s Journey of Mattoon. A memorial service in her honor will begin at 11:00 a.m., Saturday, April 16, 2016, at the First Baptist Church, 1804 S. Ninth Street, Mattoon, IL 61938, with Reverend Dennis Strawn officiating. Visitation will be held at the church from 10:00 a.m. until the service begins. Mitchell-Jerdan Funeral Home, located at 1200 Wabash Avenue, Mattoon, IL 61938, is assisting the family with arrangements. Born January 30, 1945, in Mattoon, IL, Lynette, as she was more commonly known, was the daughter of Max and Virginia (Edwards) Hilligoss. She married Jerry Shewmake on December 28, 1988. He passed away on May 21, 2011. Survivors include six children, Bobbie Haycraft and husband Dale of Humboldt, IL, Sherri Spivey of Mattoon, IL, Chuck Brooks and wife Laura of Decatur, IL, Leann Brackney of Charleston, IL, Tina Huston of Charleston, IL, and Theresa Stevens and husband Gary of Mattoon, IL; one brother, Max Hilligoss, Jr. of Ogden, UT, and many beloved grandchildren and great grandchildren. In addition to her husband, she was preceded in death by her parents and a son-in-law, Tom Spivey. Lynette was an active member of the First Baptist Church of Mattoon, IL, where she was a choir member and had held several roles. Prior to retiring in 2005, Lynette was employed by Ampad in Mattoon, IL. Lynette was an avid sports fan and most sincerely, a die-hard Chicago Cubs fan. Her passion and devotion to her team earned her title “Cub Lady” to all those who knew her and even some who did not. Memorials in her honor may be made to the First Baptist Church of Mattoon or the Alzhiemer’s Association, www.alz.org, 207 S. Prospect Road, Suite 1, Bloomington, IL 61704. Please visit www.mitchell-jerdan.com or www.facebook.com/mitchelljerdanfuneralhome to light a virtual candle in her honor or share a memory with her family.

The family of Marie Lynette "Cub Lady" Shewmake created this Life Tributes page to make it easy to share your memories.

Send flowers to the Shewmake family.