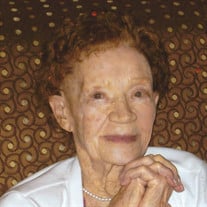 Mattoon, IL – Marie Corenne Kempher, age 99, of Mattoon, IL, formerly of Leesburg, IN, passed away at 7:05 p.m., Tuesday, November 17, 2015 at Life’s Journey Mattoon. Services in her honor will be held at a later date. Mitchell-Jerdan Funeral Home, located at 1200 Wabash Avenue, Mattoon, IL, 61938, is assisting the family with arrangements. Born November 30, 1915, in Fairmount, IN, Marie was the daughter of Arthur B. and Etta K. (Kirkpatrick) Brewer. She married Harry F. Kempher on January 5, 1946, in Marion, IN. He passed away July 15, 1999. Survivors include: their children, Victoria K. Christman, of Mattoon, IL, and Robert L. Kempher and wife Tammy of Ft. Wayne, IN; Three grandchildren, Tara L. Kauffman and husband Mark of Hanover, PA, Kirk P. Christman and wife Laura of Bemidji, MN, and Harry D. Christman and wife Ananya of Burlington, VT; Four grandchildren, Christopher and Kayla Kauffman of Hanover, PA, Lilah Christman of Burlington, VT, and Eli Christman of Bemidji, MN. In addition to her husband, she was preceded in death by her parents, two brothers and two sisters. Mrs. Kempher earned a bachelor’s degree from Purdue University and a master’s degree from Ball State University. She began her teaching career in Fairmount, IN. She later moved on to Marion Grade School in Marion, IN, and then to Sweetser High School in Sweetser, IN, and finally to Oakhill High School in Converse, IN, where she taught until her retirement in 1977. Marie was a beloved teacher and cheer leading sponsor. Her former students include actor James Dean and Jim Davis, the creator of Garfield, both of Fairmount, IN. Each year she is honored by the Oak Hill High School’s Annual Marie Kempher Award, an award given to the most outstanding female athlete. In addition to her accomplishments as a teacher, Marie was the founder of the Tippecanoe Women’s Association, a member of the Lake Tippecanoe Property Owners, American Legion Ladies Auxiliary, and a life time member of the Purdue Alumni. Mrs. Kempher was a member of the Presbyterian Church of Marion, IN, and attended the First Baptist Church of Leesburg, IN. Please visit www.mitchell-jerdan.com or www.facebook.com/mitchelljerdanfuneralhome to light a virtual candle in her honor or share a memory with her family.

The family of Marie Corenne Kempher created this Life Tributes page to make it easy to share your memories.

Send flowers to the Kempher family.