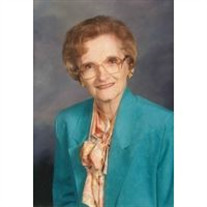 Tuscon, AZ - Marianne Bower Doyle McKinney, 86, passed away peacefully in her sleep on June 18, 2013 at the home of her son, Loren C. Doyle in Tucson, AZ. \r\n\r\nFuneral services in her honor will begin at 10:00 a.m., Wednesday, June 26, 2013 at the First Baptist Church, 1804 S. 9th St., Mattoon, IL 61938, with Pastor Dennis Strawn officiating. Interment will follow in Roselawn Cemetery, Charleston, IL. Visitation will be held at Mitchell-Jerdan funeral home, 1200 Wabash Avenue, Mattoon, IL 61938, Tuesday, June 25, 2013 from 5 to 8 pm.\r\n \r\nMarianne was born on May 24, 1927 to Arthur Oliver Bower and Florence Mae Bower in Bushton, IL. She graduated from Eastern Illinois University with a Bachelor of Science in Biology in 1948 and a Master of Science in Botany in 1966. As an educator, she taught in the Mattoon School System for 31 years from 1956 to 1987. During her tenure as Head of the Science Department at Mattoon High School, she was appointed as the science advisor to the President of the Central Illinois Public Service Company. A 50 year member of the Delta Kappa Gamma Society for professional women educators, Marianne served as president of the Gamma chapter twice and Lambda State vice-president along with many other positions. She was a member of the First Baptist Church of Mattoon for 63 years holding positions as moderator, church council president, and director of senior adult visitation. Additionally, she was very active in the American Baptist Women ministries serving as Area 4 president and Great Rivers Region president among other positions. She was a member of Gateway Builders Sunday School class for over 25 years. \r\n\r\nMarianne was preceded in death by her first husband of 47 years, Loren L Doyle and her second husband of 14 years, Willis E McKinney. \r\n\r\nShe is survived by her brother, Arthur Bower (Darcy) of Manitoba, Canada; her sons, Loren C Doyle (Mary) of Tucson, AZ and Eric M Doyle (Marilyn) of Jeffersonton, VA; nieces, Cindy Hembaugh and Kim Connolly; grandsons, Jason Doyle (Peggy) and Kirtlin Doyle; granddaughter, Paige Connors; great grandchildren, Joshua, Kaitlyn, and Brandon Doyle, Savannah Connors, and Amanda Cantrell.\r\n\r\nIn addition to flowers, donations can be made to First Baptist Church, 1804 S. 9th St., Mattoon, IL, in memory of Marianne. \r\n\r\nPlease visit www.mitchell-jerdan.com or www.facebook.com/mitchelljerdanfuneralhome to light a virtual candle in her honor or share a memory with her family. \r\n

The family of Marianne (Bower) Doyle McKinney created this Life Tributes page to make it easy to share your memories.