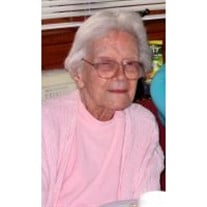 Marguerite Myers Phipps\r\n\r\nMattoon, IL - Marguerite Myers Phipps, age 100, died at her home at 10:06 p.m., on January 20, 2011. She had celebrated her 100th birthday on August 11, 2010. \r\n\r\nFuneral services in her honor will begin at 10:30 a.m., Saturday, January 29, 2011, at Mitchell-Jerdan Funeral Home, 1200 Wabash Avenue, Mattoon, IL 61938. Visitation will be one hour prior to the service. Burial at Branchside Cemetery in Gays, IL will follow.\r\n\r\nMarguerite was born August 11, 1910, the daughter of Emory C. and Artie Klingensmith Myers. She was a life-long resident of Mattoon with the exception of short teaching assignments in Sullivan and Tuscola following graduation from Eastern Illinois Normal College. She married local banker H. Otis Phipps in 1939, managing a home for her family on South 17th Street for 16 years before their moving to her current home on North 35th Street.\r\n\r\nAfter rearing her two children, Marguerite worked for 10 years at the Mattoon Public Library, combining her love of reading with a vocation; she was a proud life member of the Women's Reading Club, having joined in 1954. She was also an avid gardener and collector of recipes. Her interests in cooking and sewing led to involvement in the Coles County Home Bureau and Girl Scouting. Marguerite enjoyed traveling, both to visit family and to augment her sharp knowledge of geography. She was a member of the First Methodist Church of Mattoon for over 70 years. She was an exemplary member of 'the greatest generation'.\r\n\r\nMarguerite's husband of 54 years, H. Otis Phipps, preceded her in death in 1993. She is survived by a son, Gary Phipps, in Atlanta, Georgia, and a daughter, Mary Pagliaro, in Quartz Hill, California, as well as six grandchildren and eight great-grandchildren. Marguerite was also very close to several care-takers from Sarah's Homemakers, who helped her stay in her home in later years.\r\n\r\nIn lieu of flowers, memorial gifts may be made in Marguerite Phipps's name to the Mattoon Public Library or the First United Methodist Church in Mattoon.\r\n\r\nPlease visit www.mitchell-jerdan.com to light a virtual candle in her honor or to share a memory or condolences with the family.\r\n

The family of Marguerite Marie Phipps created this Life Tributes page to make it easy to share your memories.

Send flowers to the Phipps family.