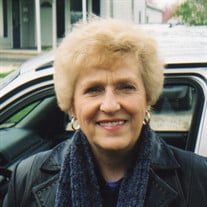 MaDonna Lea McKittrick, age 84, of Mattoon, IL, passed away Sunday evening, February 13, 2022, at Heartland Nursing Home and Rehabilitation in Casey, IL. Mitchell-Jerdan Funeral Home, 1200 Wabash Avenue, Mattoon, IL 61938 is in charge of arrangements. MaDonna was born on August 6, 1937, in Mattoon, IL to the late Samuel William and Velma Edith (Shanoltzer) McKittrick. She is survived by one brother, William D. McKittrick of Ellicott City, MD; three nephews, Richard, Steven, and Troy Lee, all of Mattoon, IL; and two nieces, Meredith McKittrick of Middletown, MD, and Melanie Danford of Kyle, TX. She is preceded in death by one sister, Jane Lee. MaDonna was employed by Northrop Grumman as an executive secretary and was the first woman to go down the Minuteman Silo at the missile test site in Cape Canaveral, FL. Her phenomenal shorthand skills made her much in demand in an era before voice recording was widely available. She was a passionate traveler who visited thirty-three countries. Her greatest loves were her pets and her collections of antique glassware, jewelry, and other collectibles. MaDonna was a strong and unforgettable personality. She was fiercely independent and justifiably proud of her achievements, which were rare for a woman of her generation. She was also famous for telling people exactly what she thought of them and, as many can attest, for holding grudges over slights both real and perceived. She was one of a kind. Please visit www.mitchell-jerdan.com or www.facebook.com/mitchelljerdanfuneralhome to light a virtual candle in her honor or share a memory with the family.

The family of MaDonna Lea McKittrick created this Life Tributes page to make it easy to share your memories.

Send flowers to the McKittrick family.