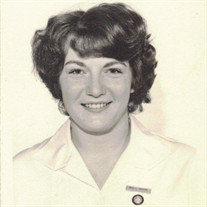 Lynda Marlene (Jackson) Hagler, age 79 of Mattoon, IL and Mesa, AZ, passed away at her residence in Mattoon, IL on Sunday, October 11, 2020. Services will be held at a later date. Mitchell-Jerdan Funeral Home, 1200 Wabash Avenue, Mattoon, IL 61938 is in charge of arrangements. Lynda was born on May 12, 1941 to the late Robert L. and Mary L. (Anderson) Jackson at her grandmother’s house in Hallsville, IL. She is survived by one son, John Hagler of Gillespie, IL; two grandsons, Cody Hagler and wife Katie of Decatur, IL, and Mason Hagler and wife Faith of Gillespie, IL; six great grandchildren; four sisters, Judith Smith of Mattoon, IL, Sharon Roberts and husband Karl of Davenport, IA, Cathy Virden of Charleston, IL, and Virginia “Ginny” Carter of Clinton, IL; two brothers, Rick Jackson and wife Nancy, and Rod Jackson and wife Emily of Mesa, AZ; one sister-in-law Linda Jackson of Kenney, IL. She was preceded in death by her grandparents; one brother, Sidney Jackson; and two nephews, Kirk Roberts, and Daeven Jackson. Lynda’s lifelong dream was to become a nurse. After graduating high school, Lynda became a Licensed Practical Nurse and worked in Bloomington, IL and Decatur, IL. In 1984 Lynda enrolled at Milliken University in Decatur, IL earning her bachelor’s degree in nursing and worked at various nursing homes in Central and Northern Illinois as the Director of Nursing. In 1993 Lynda moved to Mesa, AZ where she furthered her education at Arizona State University and obtained a master’s degree in teaching. As a Medical Assistant Instructor at Arizona Institute of Business and Technology in Phoenix, AZ, Lynda retired in 2013. Lynda was known for her fun-loving personality and great sense of humor. Please visit www.mitchell-jerdan.com or www.facebook.com/mitchelljerdanfuneralhome to light a virtual candle in her honor or share a memory with the family.

The family of Lynda Marlene Hagler created this Life Tributes page to make it easy to share your memories.

Send flowers to the Hagler family.