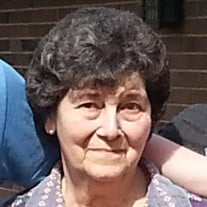 Charleston, IL – Lula M. Johnson, age 84, of Charleston, IL, passed away at 6:30 a.m., Wednesday, January 13, 2016 at Carle Hospital in Urbana, IL. Private family services in her honor will be held at 11:00, Tuesday, January 19, 2016, at Mitchell-Jerdan Funeral Home, 1200 Wabash Avenue, Mattoon, IL 61938. Reverend Stephanie Johanpeter will officiate. Burial will follow in Resthaven Memorial Gardens. There will be no public visitation. The daughter of James Harold and Elda Adeline (Newlie) Fritsch, Lula was born on July 1, 1931, in Prophetstown, IL. She married Henry B. Johnson, Jr., on March 18, 1962, in Wisconsin. He passed away on December 23, 2010. She is survived by three children: Dan L. Kuepker of Rolling Hills, IN, Linda L. Wetter and husband Bob of Portland, OR, and Jane A. Slaughter and husband Patrick of Charleston, IL. She also leaves eight grandchildren, eight great-grandchildren, and two great-great-grandchildren. In addition to her husband, she was preceded in death by her parents. Mrs. Johnson was formerly employed by the Savanna Army Depot in Savanna, IL, as a Draftsman. She was a member of the St. John’s Lutheran Church in Schapville, IL. Lula cherished her family more than anything. Known for her selflessness, generosity, and kindness, she will be deeply missed by all those whose lives she touched. Please visit www.mitchell-jerdan.com or www.facebook.com/mitchelljerdanfuneralhome.

The family of Lula M. Johnson created this Life Tributes page to make it easy to share your memories.

Send flowers to the Johnson family.