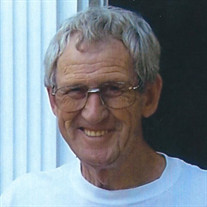 Mattoon, IL – Loyce Thomas "L.T." Jewell, age 80, of Mattoon, IL, passed away at 9:55 p.m., Monday, January 9, 2017, at Mattoon Health Care Center. The graveside service in his honor will begin at 11:00 a.m., Monday, January 16, 2017, at Resthaven Memorial Gardens. There will be no visitation. The family requests no flowers and casual attire. Mitchell-Jerdan Funeral Home, located at 1200 Wabash Avenue, Mattoon, IL 61938, is assisting the family with arrangements. Born June 10, 1936, in Lucas, KY, L.T. was the son of E.N. and Katherine (Gregory) Jewell. He married Shirley Logsdon on November 4, 1960, in Mattoon, IL. She passed away December 25, 2001. Survivors include their children, Sharon Lewis and husband Mark of Bloomington-Normal, IL, and Karen Beason and husband Mark of Mattoon, IL; two grandchildren, Ryan Beason of Camp LeJeune, NC, and Addison Lewis of Urbana, IL. In addition to his wife, he was preceded in death by his parents; two brothers, John and Raymond Jewell; and one sister, Edna Jewell. Prior to his retirement in 1997, L.T. had been employed by R.R. Donnelly’s as an auxiliary equipment maintenance technician. He had previously owned Jewell’s Janitor Service and had worked as a cook at Gill’s restaurant. Mr. Jewell served our country with the Army National Guard and then the United States Navy. He was a member of the First United Methodist Church. He was also a member of the Mattoon Masonic Lodge #260. In his free time, L.T. enjoyed wood working and was a talented carver. He also loved fishing and gardening, and was a loyal and devoted Chicago Cubs fan. He cherished his family and was a devoted husband and a wonderful father, however, nothing brought greater joy or more love to his life than being PawPaw to Ryan and Addison. L.T. never met a stranger and will be remembered for his love for life. Memorials in his honor may be made to the Mattoon Community Food Center, 600 Moultrie Avenue, Mattoon, IL 61938. Please visit www.mitchell-jerdan.com or www.facebook.com/mitchelljerdanfuneralhome to light a virtual candle in his honor or share a memory with his family.

The family of Loyce Thomas "L.T." Jewell created this Life Tributes page to make it easy to share your memories.

Send flowers to the Jewell family.