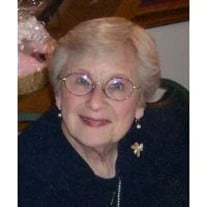 Mattoon, IL-Louise (Kaelberer) Roberts, age 85, of Mattoon, IL, passed away at 9:25 p.m., Friday, March 25, 2011, at the Champaign Urbana Regional Rehabilitation Center. \r\nThe funeral service in her honor will begin at 11:00 a.m., Saturday, April 23, 2011 at Mitchell-Jerdan Funeral Home, 1200 Wabash Avenue, Mattoon, IL, 61938. The visitation will be held one hour prior to the service at the funeral home.\r\nLouise was born December 14, 1925, in Mattoon, IL, the daughter of George and Jennie Marguerite(Votaw) Kaelberer. She married the love of her life, Walter C. Roberts on November 30, 1945. He passed away September 3, 2005. Survivors include three children, Ross W. Roberts and wife Colleen of Mobile, AL, Timothy G. Roberts and wife Maggie Dougherty-Roberts of Champaign, IL, and Laurie R. Ohls and husband Andrew of Champaign, IL.; ten grandchildren, Jeff Ross, Rachel Wicks, Joshua Roberts, Joey Roberts, Kerry Roberts, Jennie Roberts, Molly Roberts, Charity Anderson, Jared Young, and Trent Huddleston; and eight great grandchildren. In addition to her husband, she was preceded in death by both parents. \r\nLouise was a homemaker and cherished her family. She especially enjoyed having grandchildren and great grandchildren. She had a vibrant personality and will be truly missed by her family and all those whose lives she touched. \r\nMemorials in her honor may be made to the Lytle Park in care of Justin Grady, 3320 Western Avenue, Mattoon, IL 61938. \r\nPlease visit www.mitchell-jerdan.com to light a virtual candle in her honor or share a memory with the family. \r\n

The family of Louise (Kaelberer) Roberts created this Life Tributes page to make it easy to share your memories.

Send flowers to the Roberts family.