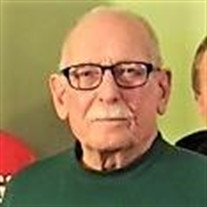 Louis Edward Bratton, age 79 of Mattoon, IL passed away at 12:15 P.M., Saturday, May 12, 2018 at St. Johns Hospital in Springfield, IL. A funeral service in his honor will be held at noon, Thursday, May 17, 2018 at Mitchell-Jerdan Funeral Home, 1200 Wabash Avenue, Mattoon, IL 61938. Burial will follow at 3:30 P.M. at Gundy Cemetery in Bismarck, IL. The visitation will be held at the funeral home from 10:00 A.M. until the time of service. Louis was born February 23, 1939 in Danville, IL the son of Louis W. and Juanita (Hall) Bratton. He married Shirley Ann Siddens on August 30, 1968; she passed away December 2, 1993. Louis is survived by his three children; one daughter, Deborah K. Way and husband William of Georgetown, IL; two sons, Louis E. Bratton II and wife Kimberly of Mattoon, IL, Douglas W. Bratton of Madison, WI; four grandchildren, Alex and Mackenzie Bratton of Mattoon, IL, Parker and Hunter Way of Georgetown, IL; four sisters, Janice M. Evans and husband James of Danville, IL, Barbara D. Stephens of Indianapolis, IN, Connie M. Gumm of Sidell, IL, Paula K. Long of Danville, IL; and two brothers, Lawrence A. Bratton of Danville, IL, and Donald E. Bratton of Brownsburg, IN. He is preceded in death by his parents, wife, and one son, David Allen Bratton. Louis honorably served our country in the Army from 1956-1959. He was employed by Offutt Construction of Danville, IL and later employed by Old National Bank in Danville, IL. He enjoyed watching sports and was an avid Chicago Cubs fan. Louis liked fishing, bowling, gardening, and canning jelly. Above all else, he loved being with his family, who will miss him dearly. Please visit www.mitchell-jerdan.com or www.facebook.com/mitchelljerdanfuneralhome to light a virtual candle in his honor or share a memory with the family.

The family of Louis Edward Bratton created this Life Tributes page to make it easy to share your memories.

Send flowers to the Bratton family.