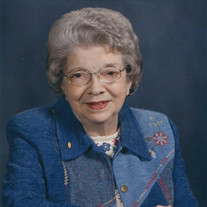 Lois Margaret Smith, age 93, of Mattoon, IL passed away at 3:50 P.M. December 13, 2017 at Heartland Christian Village in Neoga, IL. A funeral service in her honor will be held at 11:00 A.M. on Saturday, December 16, 2017 at the First United Methodist Church, located at 1601 Charleston Avenue in Mattoon, IL 61938 with Rev. Michael Smith officiating. Burial will follow at Dodge Grove Cemetery in Mattoon, IL. Visitation will be held at 9:00 A.M. until the time of service at the church. Mitchell-Jerdan Funeral Home, 1200 Wabash Avenue, Mattoon, IL 61938, is assisting the family with arrangements. Lois was born November 27, 1924 in Mattoon, IL, the daughter of Albert and Alice (Veal) Rust. She married H. Gene Smith on April 6, 1952 in her parent’s home in Mattoon, IL. She is survived by her two daughters Peggy Smith Luy and husband Don of Caledonia, MI; and Sharon Smith Uphoff and husband John of Mattoon; grandchildren Meredith Uphoff Pitts of Lexington, KY; Megan Uphoff Stewart and husband Brandon of Mattoon; and Brett Luy and wife Kelsey of Tampa, FL; great grandchildren Andrew, Isaac and Avery Pitts and Joey and Raylee Stewart as well as sister Helen Rust Cutright of Greenup, IL and numerous nieces and nephews. She is preceded in death by her husband of more than 40 years and son Eric, as well as her parents. Lois was a devoted member of the First United Methodist Church of Mattoon, IL. She was very proud contributor to several groups within the church. She was a member of the Champion Sunday School Class and Mary Circle. Lois and her husband were very involved with their daughter’s activities. She received the Grand Cross of Color for a parent’s devotion from the Order of Rainbow for Girls. She also was a member of the Order of Eastern Star. She enjoyed being active in her earlier days as a member of the Mattoon Women’s Bowling League. Prior to being married, she was the Executive Secretary to the president of Hayes Freight Line. Together with Gene, they ran Smith Machine Shop for over 40 years. Later in life she appreciated being a seamstress, enjoying knitting and crocheting as well as being an avid reader. Memorials in her honor may be made to First United Methodist Church of Mattoon, IL, 1601 Charleston Avenue, Mattoon, IL 61938. Please visit www.mitchell-jerdan.com or www.facebook.com/mitchelljerdanfuneralhome to light a virtual candle in her honor or share a memory with the family.

The family of Lois Margaret Smith created this Life Tributes page to make it easy to share your memories.