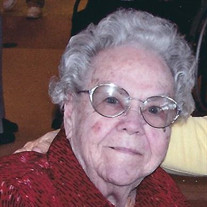 Mattoon, IL – Lois Maxine “Mac” Eldridge, age 91, of Mattoon, IL, passed away at 7:51 p.m., Tuesday, November 17, 2015 at Douglas Rehabilitation and Health Care Center. A memorial service in her honor will begin at 10:30 a.m., Monday, November 23, 2015, at the Mattoon Free Methodist Church, 606 S. 17th St., Mattoon, IL, 61938. There will be no visitation. Burial will be in Tower Heights Cemetery in West Frankfurt, IL. The family was assisted by Mitchell-Jerdan Funeral Home, located at 1200 Wabash Avenue, Mattoon, IL, 61938. Born December 21, 1923, in West Frankfurt, IL, Mac was the daughter of John Edwin and Eunice Marie (Oliver) Grubbs. She married Loren “Bogy” Earl Eldridge on January 24, 1948, in West Frankfurt, IL. He passed away on June 10, 1994. Survivors include: their son, Larry N. Eldridge and wife Deborah of Mattoon, IL; A sister, Norma J. Harkins of Mattoon, IL; Two grandchildren, Chaifen Eldridge and wife Becky of Mattoon, IL, and Skyler Eldridge and wife Taylee of Mattoon, IL; Two great-grandchildren, Nate Eldridge and Asher Eldridge, and several nieces and nephews. In addition to her husband, she was preceded in death by her parents and a brother, Edwin Grubbs. Mac was a homemaker. She was also a member of the Mattoon Free Methodist Church and a devoted follower of Jesus Christ. Please visit www.mitchell-jerdan.com or www.facebook.com/mitchelljerdanfuneralhome to light a virtual candle in her honor or share a memory with her family.

The family of Lois "Mac" Maxine Eldridge created this Life Tributes page to make it easy to share your memories.

Send flowers to the Eldridge family.