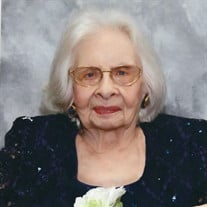 Lois Eugenia Lewis, age 92 of Charleston, IL passed at 11:25 P.M., Wednesday, April 25, 2018 at Mattoon Health Care Center in Mattoon, IL. At Mrs. Lewis request there will be no visitation or funeral, burial will be at Roselawn Cemetery in Charleston,... View Obituary & Service Information

The family of Lois Eugenia Lewis created this Life Tributes page to make it easy to share your memories.

Send flowers to the Lewis family.