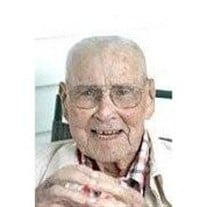 Lloyd C. Ring\r\n\r\nMattoon, IL- Lloyd C. Ring, age 89, of Mattoon, IL, passed away at 12:23P.M. on Saturday, May 9, 2009 surrounded by his family at his home.\r\n\r\nFuneral services honoring his life will begin at 10:00 A.M. Tuesday, May 12, 2009 with Pastor Lou Butler officiating at the Mitchell-Jerdan Funeral Home, 1200 Wabash Ave., Mattoon, IL 61938. Burial will be in Dodge Grove Cemetery in Mattoon, IL. Visitation will be held from 5:00-7:00 P.M. Monday, May 11, 2009 at the Mitchell-Jerdan Funeral Home.\r\n\r\nLloyd was born on January 31, 1920 in Centralia, IL, the son of Newton and Bessie (Corners) Ring. He married the love of his life Betty 'Jo' Porter on April 27, 1946 in Mattoon, IL. She passed away on June 2, 2007 in Mattoon, IL.\r\n\r\nSurvivors include two daughters; Barbara 'Bobby' Hilligoss and her husband Rex of Mattoon, IL and Pamela 'Pam' Bales and her husband Robert 'Bob' of Okeechobee, FL; one sister, Reba McWhirter of Centralia, IL; four grandchildren, Jeff Hilligoss and his wife Beth of Lerna, IL, Andy Hilligoss of Mattoon, IL, Korey Bales currently serving in the armed services in Iraq and his wife Jenn of Milton, Fl and Kelly Bales and his wife Carrie of Mattoon, IL; three great-grandchildren, Isabella 'Izzy' Annalee Hilligoss, Robert Sean Bales and JoAnna Marie Bales. He was preceded in death by three brothers and two sisters.\r\n\r\nMr. Ring was a retired Captain of the Mattoon, IL Fire Department where he worked for more than twenty two years. He came to Matton, IL to work in the oil industry and drove a truck for Hays Freight Lines. After his retirement from the Mattoon, IL Fire Department he continued working for Farrier Construction and Walker Construction in Mattoon, IL. He also owned and operated Ring Stump Removal in Mattoon, IL. Lloyd served his country in the U.S. Army during WWII in the Philippines.\r\n\r\nLloyd was an avid reader and after his wife's death he focused on reading the entire Louis LaMour Western Collection, he continued reading about a book a day until discovering cable television western channels which he also enjoyed. He enjoyed traveling with his wife, especially out west in the Rocky Mountain area. Other interest of Lloyds included fishing, camping and general carpenter work including making birdhouses. Mr. Ring was quite an adventurer in his younger years before settling in Mattoon, IL where he found everything that was important in his life, a loving wife, work, a home and a wonderful family. Lloyd will be sadly missed by his family and friends.\r\n\r\nIn lieu of flowers memorials may be made to the Mattoon, IL Fire Department.\r\n\r\nTo share a memory or light a virtual candle, please visit www.mitchell-jerdan .com\r\n

The family of Lloyd C. Ring created this Life Tributes page to make it easy to share your memories.

Send flowers to the Ring family.