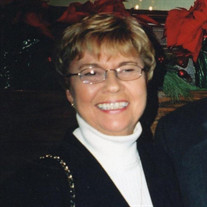 Lila Lee Branson, age 86 of Mattoon, IL passed away Tuesday, June 29, 2021, at 4:10 PM at her residence in Mattoon, IL. A funeral service in her honor will be held at 6:00 PM, Wednesday, July 7, 2021, at Mitchell-Jerdan Funeral Home, 1200 Wabash Avenue, Mattoon, IL 61938; Reverend Ron Dickinson will officiate. A visitation will be held from 4:00 PM until the time of service at the funeral home. Lila was born October 4, 1934, in Stewardson, IL to the late Louise Alma Quast. She was raised by her mother and stepfather Merton Rohlf. She married Keith D. Branson on June 15, 1952, in Mattoon, IL; he preceded her in death on September 5, 2014. She is survived by one son, Rick K. Branson and wife Debbie of Lerna, IL; two daughters, Christie L. Lawrence and husband Jim of Mattoon, IL, Carla S. Jackson and husband Mark of Mattoon, IL; six grandchildren, Krista A. Branson, Kasey L. Lawrence, Clint R. Lawrence and wife Laine, Tyson B. Sledge and wife Danielle, M. Tate Jackson, Avery E. Jackson; four step-grandchildren, M. Jason Lee, Lisa Drury and husband Chuck, Derek Runnels, Misty Janssen; four great-grandchildren, Gavin Lawrence, Ava Sledge, Everett Sledge, Brynlee Lawrence; seven step great-grandchildren; one step great-great grandchild; and one aunt, Dorothy Camic. A homemaker, Lila raised her children and created a home filled with laughter and love. Family was an important fixture in Lila’s life and never missed an opportunity to be surrounded by loved ones. Lila was a devoted grandmother, always attending recitals and sporting events as the designated office keeper of the family’s sports statistics and biggest cheerleader. Lila was an active member of Mattoon Area Family YMCA and Mattoon Golf and Country Club, where she spent endless hours playing tennis and golf. She looked forward to her weekly card games with her Bridge Club and the friendships that were made over time and treasured for years. Lila will be remembered for her energetic spirit and kind nature. She will be missed by many and was loved by all. Memorials in her honor may be made to Mattoon Area Family YMCA, 221 N 16th Street, Mattoon, IL, 61938. Please visit www.mitchelljerdan.com or www.facebook.com/mitchelljerdanfuneralhome to light a virtual candle in her honor or share a memory with the family.

The family of Lila Lee Branson created this Life Tributes page to make it easy to share your memories.

Send flowers to the Branson family.