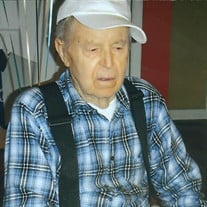 Lester “Les” Eugene Paul, 100 years old of Mattoon, IL passed away at 4:37 P.M. Tuesday, April 24, 2018 at Odd Fellow-Rebekah Home in Mattoon, IL. A graveside service will be held at 11:00 A.M., Friday, April 27, 2018 at Dodge Grove Cemetery with Reverend Ron Dickinson officiating. Mitchell-Jerdan Funeral Home, located at 1200 Wabash Avenue, Mattoon, IL 61938 is assisting the family with arrangements. Les was born on August 29, 1917 in Gila, IL to the late Amos and Rose (Ernest) Paul. He married Ila Mae Wilson on January 15, 1950 in Toledo, IL. Les is survived by his wife, Ila Paul of Mattoon, IL. He is preceded in death by one daughter, Jane Paul; five brothers, Kelly Paul, Harry Paul, Lee Paul, Harold Paul, and Edmond Paul; three sisters, Blanche Paul, Cecil Cleeton, and Gladys Paul. Les honorably served our country in the US Army during WWII in the European African Middle Eastern Theater. He was a devoted member of the First United Methodist Church in Mattoon, IL and member of the VFW Post 4325 in Mattoon, IL. His passion in life was his carpentry; he was a true craftsman of his trade and took great pride in the quality of his work. Les worked for as long as he could, even roofing a house at the age of seventy-five and plumbing at ninety years old. He was happy when he was working. He enjoyed eating out with Ila, seeing people and socializing. Les touched the lives of many throughout the years, his hard work and dedication made a lasting impact and he will be greatly missed. Memorials in his honor may be made to First United Methodist Church, 1601 Charleston Avenue, Mattoon, IL 61938. Please visit www.mitchelll-jerdan.com or www.facebook.com/mitchelljerdanfuneralhome to light a virtual candle in his honor or share a memory with the family.

The family of Lester Eugene Paul created this Life Tributes page to make it easy to share your memories.

Send flowers to the Paul family.