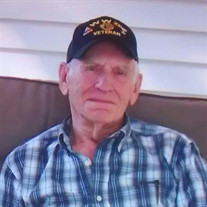 Mattoon, IL – Lester Raymond Fleming, age 91, of Mattoon, IL, passed away at 1:22 p.m., Sunday, March 19, 2017, at his residence. The funeral service in his honor will begin at 1:00 p.m., Wednesday, March 22, 2017, at Mitchell-Jerdan Funeral Home, 1200 Wabash Avenue, Mattoon, IL, 61938. Pastor Robert Swickard will officiate. Interment will follow in Zion Hill Cemetery. Military rites will be conducted by the Mattoon VFW Post 4325. Visitation will be held Wednesday, at the funeral home, from 11:00 a.m. until the service begins. Mr. Fleming was born April 25, 1925, in Arthur, IL, the son of Ray and Permilla (Turpin) Fleming. He married Cora L. Hendrix on September 11, 1947 in Arthur, IL. She survives. Other survivors include their children, Susan Floyd of Mattoon, IL and Debbie McKay of Charleston, IL; one sister, Lois Ann VanSickle of California; six grandchildren, Jenny Gergeni and husband David of Mattoon, IL, Andy Floyd and wife Heather of Paxton, IL, Amanda Hagler and husband Brian of Edmond, OK, Kristi Lowell and husband Chad of Charleston, IL, Lindsay Dell and husband Adam of Charleston, IL, and Ryan McKay and wife Megan of Mattoon, IL; and thirteen great-grandchildren: Mitchell, Ella, Connor, Reece, Sawyer, Colton, Tyler, Brandon, Dylan, Logan, Garrett, Rowen, and Dasch. He was preceded in death by his parents and two brothers. Mr. Fleming served our country with the United States Army as a staff sergeant. During World War II, he was awarded the Silver Star Medal for his valor during combat. The Silver Star is the third highest combat decoration that can be awarded to a member of the United States Armed Forces. He was also a recipient of the Purple Heart Medal. Mr. Fleming was a member of the Faith United Methodist Church. He had previously served as the District Lay Leader and Speaker in the Methodist Conference. Prior to his retirement, Lester had been employed with Anamet Electrical, Inc., where he had worked in management. Throughout his career, he had also worked for Kuehnes, Arthur Lumber Sales, and Young Radiator. In his free time, he enjoyed singing, gardening, and walking; however, his favorite way to pass the time was spending it with family. He especially enjoyed his grandchildren and great-grandchildren. Memorials in his honor are requested to the Alzheimer’s Association, Hospice of Coles County, or Brookstone Estates of Charleston. Please visit www.mitchell-jerdan.com or www.facebook.com/mitchelljerdanfuneralhome to light a virtual candle in his honor or share a memory with his family.

The family of Lester Raymond Fleming created this Life Tributes page to make it easy to share your memories.

Send flowers to the Fleming family.