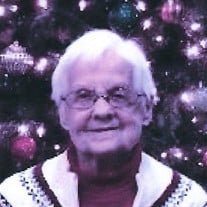 Mattoon, IL – Leona M. Magee, age 91, of Mattoon, IL, passed away at 6:50 p.m., Tuesday, February 7, 2017, at her residence. The funeral service in her honor will begin at 11:00 a.m., Saturday, at the First United Methodist Church of Hanover, IL. Pastor Tiffany Garcia will officiate. Interment will follow in Evergreen Cemetery. Visitation will be held at the church from 10:00 a.m. until the service begins. Mitchell-Jerdan Funeral Home, located at 1200 Wabash Avenue, Mattoon, IL 61938. Born September 23, 1925, in Galena, IL, Leona was the daughter of Emerson and Mary (Ferguson) Houy. She married Lavern Ryder in 1943. He passed away in 1969. She later married Orville Magee in 1972. He passed away in 1979. Survivors include a daughter-in-law, Nancy Basham of Mattoon, IL; a sister, Betty Rausch of Stockton, IL; a nephew, Jerry Callahan of Hanover, IL; a niece, Tudy Anderson of Rockford, IL; two grandchildren, Anya Bloodworth and husband Jim of Juliette, GA, and Noelle Goeckner and husband Todd of Indianapolis, IN; nine great-grandchildren: Claire, Chase, and Chloe Murray; Cade and Elaine Bloodworth; Owen, Jake, and Lucy Goeckner; and Jaelyn Ryder. She also leaves several nieces and nephews. She was preceded in death by her only son, Kenneth Lavern Ryder on September 4, 1994; one brother, Russell Houy; and one grandson, Kenneth Calvert Ryder. Leona worked at the Savanna Ordinance Depot for 23 years. She was a member of the First United Methodist Church of Hanover and had been active in the Women’s Society, Bible School, and choir. She was also a member of the Hanover Order of the Eastern Star. In her free time, she enjoyed embroidery and vegetable and flower gardening. Please visit www.mitchell-jerdan.com or www.facebook.com/mitchelljerdanfuneralhome to light a virtual candle in her honor or share a memory with her family.

The family of Leona M. Magee created this Life Tributes page to make it easy to share your memories.

Send flowers to the Magee family.