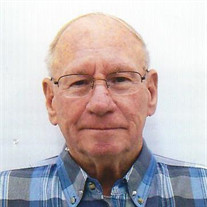 Mattoon, IL – Lawrence G. Grieshammer, Jr., age 85, of Mattoon, IL, passed away at 5:06 p.m., Sunday, April 10, 2016, at Carle Foundation Hospital in Urbana, IL. The funeral mass in his honor will begin at 10:00 a.m., Thursday, April 14, 2016, at the Immaculate Conception Catholic Church, 320 N. 21st St., Mattoon, IL 61938. Burial will follow in Dodge Grove Cemetery with military rites conducted by the Mattoon VFW Post 4325. Visitation will be held Wednesday evening from 5:00 – 7:00 p.m., at Mitchell-Jerdan Funeral Home, 1200 Wabash Avenue, Mattoon, IL 61938. Biblical wake will begin at 4:30 p.m. Born February 15, 1931, in Jefferson City, MO, Lawrence was the son of Lawrence George and Kathryn Elizabeth (Baker) Grieshammer. He married Rosemary Tyler in 1968, in Mattoon, IL. She passed away in 1997. Survivors include three children, Debra Banta and husband Lyle of Conroe, TX, Steven Fagan and wife Sally of Peculiar, MO, and Amy Davee and husband Mitchell of Mattoon, IL; one sister, Jeanette Bova of Golden Eagle, IL; and three grandchildren, McKenzee Davee, Brock Davee, and Tyler Fagan. In addition to his wife, he was preceded in death by one brother, John Grieshammer; three sisters, Kathryn Miller, Florence Carey, and Dorothy Zimmerle; and one grandson, Colin Fagan. Mr. Grieshammer served our country with the United States Navy aboard the USS Duncan Destroyer, during the Korean War. Prior to retiring in 1994, Lawrence was employed by USI/Quantum of Tuscola, IL. He was a member of the Immaculate Conception Catholic Church of Mattoon, IL. Other memberships included the VFW Post 4325, Moose and Eagles Clubs of Mattoon, and the USI Retirement Breakfast Club. Football and basketball were two of his favorite sports. He was a fan of the St. Louis Cardinals and the Mizzou Tigers; however, his favorite sporting events to watch were those of his grandchildren. Traveling to visit his sisters in Missouri, yearly vacations to Florida, and many family Caribean Cruises, were among his most cherished memories. His hobbies included gardening, fishing, winemaking, and telling stories of his work and Navy days. His wonderful stories will be missed by all those who had the privilege of hearing them. Boy, could he tell a story! Memorials in his honor may be made to the Immaculate Conception Catholic Church, PO Box 468, Mattoon, IL 61938. Please visit www.mitchell-jerdan.com or www.facebook.com/mitchelljerdanfuneralhome to light a virtual candle in his honor or share a memory with his family.

The family of Lawrence Grieshammer created this Life Tributes page to make it easy to share your memories.

Send flowers to the Grieshammer family.