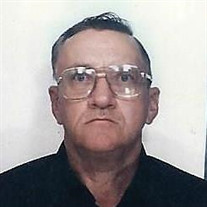 Lawrence C. Davis, age 79, of Mattoon, IL, passed at 4:52 A.M., Monday, January 8, 2018, at Sarah Bush Lincoln Hospital in Mattoon, IL. The funeral service in his honor will be held at 12:00 P.M., Tuesday, January 16, 2018, at Mitchell-Jerdan Funeral Home, 1200 Wabash Avenue, Mattoon, IL 61938, with Pastor Ian Stamps officiating. Burial will follow at Dodge Grove Cemetery in Mattoon, IL. The visitation will be held at the funeral home from 10:00 A.M. until the time of service begins. Lawrence was born December 16, 1938, in Sadler, KY, the son of Stanford and Mary Ann (Whoberey) Davis. He married Nellie Ann Hernandez, she passed away in 1968. Lawrence is survived by his son, Wayne Hernandez of Cooks Mills, IL. He is preceded death by his parents, one son, five brothers, and two sisters. Lawrence worked as an auto mechanic before he retired. He enjoyed Mother Nature, fishing, and working in his garden. Please visit www.mitchell-jerdan.com or www.facebook.com/mitchelljerdanfuneralhome to light a virtual candle in his honor or share a memory with the family.

The family of Lawrence Davis created this Life Tributes page to make it easy to share your memories.