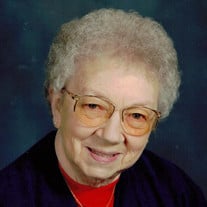 Laura “Christine” McConnell, age 91 of Mattoon, IL passed away at 4:35 AM, Friday, January 15, 2021 at Odd Fellow-Rebekah Home in Mattoon, IL. A funeral service in her honor will be held at 10:00 AM, Wednesday, January 20, 2021 at Mitchell-Jerdan Funeral Home, 1200 Wabash Avenue, Mattoon, IL 61938; Reverend Ron Dickinson will officiate. A committal service will immediately follow at Dodge Grove Cemetery. A visitation will be held from 5:00 PM to 7:00 PM, Tuesday evening, January 19, 2021 at Mitchell-Jerdan Funeral Home. Christine was born on December 4, 1929 to the late Edward and Ola Pearl (Jackson) Guyette. She married Lloyd Dale McConnell on January 10, 1951; he preceded her in death on June 21, 2003. She is survived by one son, Terry McConnell and wife Melody of Mattoon, IL; one daughter, Sandra Fisher and husband Carl of Humboldt, IL; one daughter-in-law, Joan McConnell of Mattoon, IL; five grandchildren, Nicole Rusk of Mattoon, IL, Jason McConnell and wife Mandy of Humboldt, IL Matthew McConnell of Toledo, IL, Robert Fisher and fiancée Christie Yielding of Humboldt, IL, Briana Cisna of Mattoon, IL; three great-grandchildren, Corbin, Baily, and Chevelle; one great-great grandchild, Grayson. She was preceded in death by one son, Benny McConnell; three brothers; and one sister. Christine was a long time and faithful member of the First United Methodist Church in Mattoon, IL. Before her retirement, Christine was employed by Walgreens and years prior she worked at the locally owned Top Boy restaurant. Christine was a lifetime member of the VFW in Mattoon, IL, and former member of the Moose Club in Mattoon, IL. Traveling throughout the United States and playing BINGO were activities she took pleasure in. Most of all she enjoyed spending time with her family. Christine will be greatly missed and fondly remembered. Please visit www.mitchell-jerdan.com or www.facebook.com/mitchelljerdanfuneralhome to light a virtual candle in her honor or share a memory with the family.

The family of Laura "Christine" McConnell created this Life Tributes page to make it easy to share your memories.

Send flowers to the McConnell family.